Opinion: Loss of the Rams leads to conflicting emotions in St. Louis 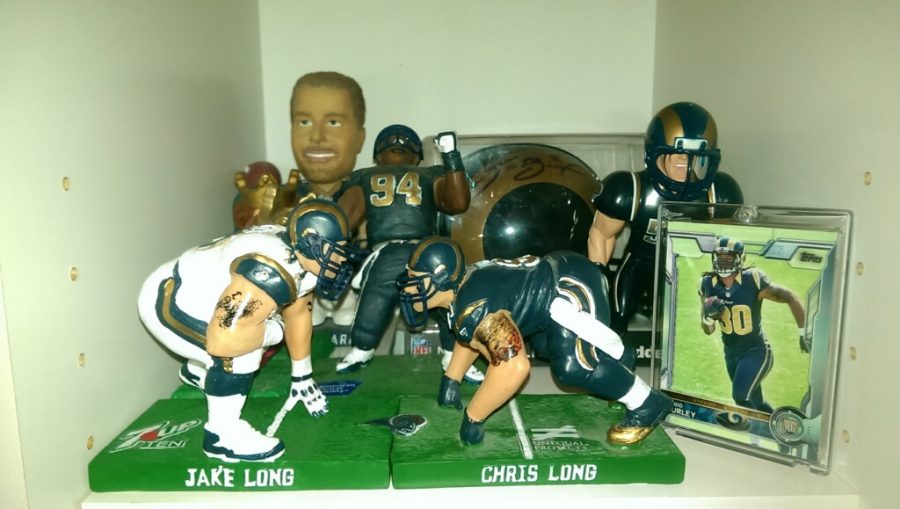 A Rams fan keeps a shrine of memorabilia from several seasons the Rams played in St. Louis.
Photo by Joey Schneider

Yesterday, for the first time in my 20 years on this earth, I woke up without an NFL team in my hometown of St. Louis. It’s hard to put the feeling into words, and it’s something that I’m not sure will fully set in until the 2016 season kicks off next September. There are so many conflicting emotions going on right now, both in my own brain and throughout the city.

There is anger toward Rams owner Stan Kroenke, NFL commissioner Roger Goodell and the league owners who allowed the move despite the city’s efforts to save the team. Although the city of St. Louis came up with a stadium proposal that had $400 million of public funding approved, as well as a naming rights deal with Enterprise Rent-A-Car worth an additional $150 million, the league decided that it didn’t meet their standards.  Those standards were never fully specified.

There is sadness in the realization that the memories made over the past 21 seasons will fade into the background. From now on, when outsiders think about the St. Louis Rams, it won’t be because they revolutionized the modern offensive attack with the “Greatest Show on Turf” championship-caliber teams in the late 1990s and early 2000s. It won’t be because they went through the worst five-year stretch in NFL history from 2007-2011, going 15-60. It will be because they left this city 21 years after they arrived. People will just remember that St. Louis lost their second NFL franchise, after the St. Louis Cardinals football team relocated to Arizona in 1988.

There is also sadness when you stop and think about the numerous people who no longer have a job because of this relocation. People who worked as part of the staff at the Edward Jones Dome are no longer needed. People that did jobs specific to this area connected with the franchise will no longer hold those positions. This is hundreds of local jobs that no longer exist.

In addition, the team was responsible for a large number of charitable endeavors in the area. They fed the local citizens at homeless shelters on Thanksgiving and organized coat and gift drives in the winter and at Christmas. Now, there is a void that needs filling.

There is also a sense that this city, arguably one of the most passionate sports communities in the country, lost a little bit of unity today. Although they weren’t the most exciting team to watch for most of their time here, the Rams brought the community together in a way that only professional sports can.

Hover over the points to find out what this change means for St. Louis and Los Angeles. Information from espn.com. Graphic by Carly Fristoe

We complained together while they went through countless losing streaks. We rejoiced together when they won Super Bowl XXXIV and when players like Kurt Warner, Marshall Faulk, Todd Gurley and Aaron Donald did unbelievable things. Now, we mourn the loss of our team together, knowing things will never be the same.

Some people will stop watching the NFL altogether, disgusted by the hypocrisy and greed shown by the league. A few loyal souls will continue to support the Rams from thousands of miles away. Some will latch onto new teams and become diehard fans of organizations they likely didn’t care about 48 hours ago. And others will simply become passive observers of professional football without true loyalty anywhere. One thing is for sure: This city will likely never rally around a single NFL team ever again. Those days will become distant memories, something we can all tell the future generations about.

But although memories are nice, the reality of the situation is this: St. Louis is no longer an the home of the Rams. We cannot hold onto false hope any longer. It really is over.