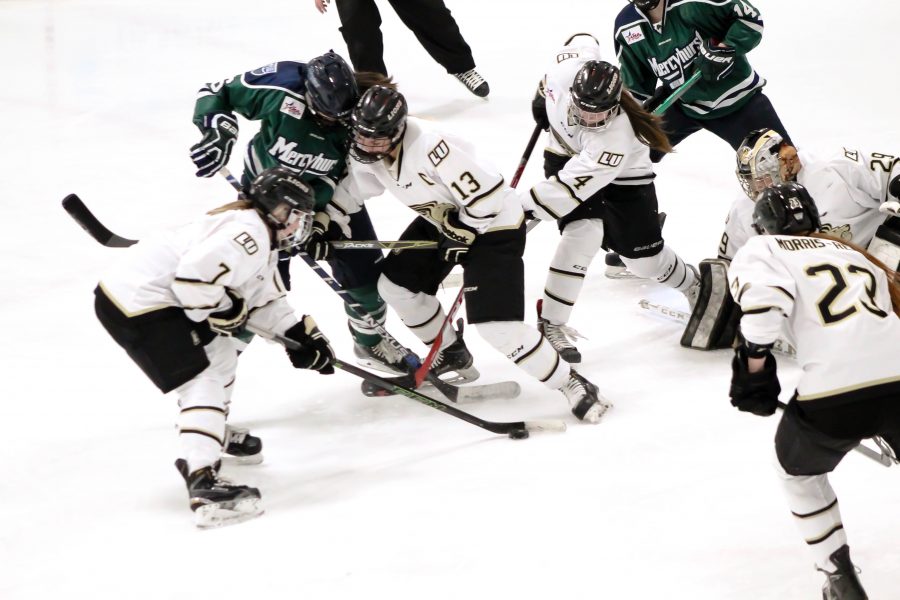 Sophomore forward Sarah Bobrowski fights for the puck after a faceoff in a game against Mercyhurst.
Photo by Kelby Lorenz

With four weekends of regular season left, the women’s hockey team is looking to find a rhythm before the CHA conference tournament. However, with four key players suffering season-ending injuries, finding a last-minute groove may prove to be the team’s toughest obstacle yet.

“We are currently playing with 14 skaters, and you normally play with 18,” said head coach Scott Spencer.

The cut altered the starting roster, making for some trial and error as positions have shifted.

“Line up has changed a lot,” said Spencer. “We may mix some people around to work in some rest here and there, but for the most part what you see now is what we are going to see the rest of the season.”

Despite their conference record of 3-5-4, Spencer said the team has responded well and is holding good energy.

“With the long road trips, the injuries that we have experienced, our group has shown their character, and it’s going to really come through down the stretch,” he said.

The team is fresh off splitting a pair of games against rival Mercyhurst and is gearing up for a trip to Pennsylvania where they will take on Robert Morris University.  Earlier this season, Lindenwood suffered a loss and a draw versus the Colonials.  To Spencer, those games are simply the past.

“We’ve been dealt a bad hand, and I want our girls to accept the challenge and do something special that a lot of people don’t think can be done,” he said.

Spencer said he does not want to be a team that makes excuses and that they still have their sights set on putting themselves in a good position for the playoffs.

“Nothing changes,” he said.  “We just have to play that much more intelligent to get it done, and I think we have the group that can do it.”