Chef Lopez brings ‘comfort’ to students through his food 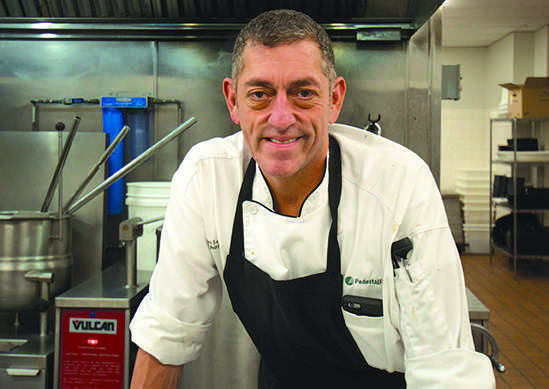 Google defines food as, “any nutritious substance that people or animals eat or drink, in order to maintain life and growth.” To Martin Lopez, one of the chefs at Lindenwood University, the word holds a greater strength.

Lopez began cooking as a child and claims he always knew he wanted to continue it as a profession.

“I’m from a large family,” he said. “There was seven of us, plus parents, and we all had responsibilities. I cooked.”

With his mom from Mexico and dad from Italy, the ingredients were endless. Lopez grew up in Alton, Illinois, and started cooking professionally after high school.

“I worked in every single area you could imagine: hotels, casinos, restaurants, large areas and small ones,” he said. “I was a regional chef in nine states. I always knew, though, that higher education would be my niche.”

He is now beginning his second semester cooking at Lindenwood University with Pedestal Foods.

One of the aspects Lopez adores from the job is the warmth the food brings the students.

“Since they live away from home, this is their cocoon,” he said. “Food brings shelter and comfort, and they look to us for that.”

Lopez also enjoys interacting with the pupils and learning from the international students. Lopez said, “Because of the students from Venezuela, we were able to make areas in Evans. The interaction, the language and to learn from them is priceless.”

Dave Scott, a manager of Pedestal Foods, stated that Chef Martin is a joy to work with.

“He runs a real tight operation which, in a kitchen environment, leads to success,” Scott said.

Lopez said he is a chef seven days a week, even when he is not at work, but he is also a professional writer, contributing to five different magazines around the country and has hosted TV segments on stations such as CBS, Fox and Diario Digital, a Spanish Network. Students can see Lopez at Evans during the semester.