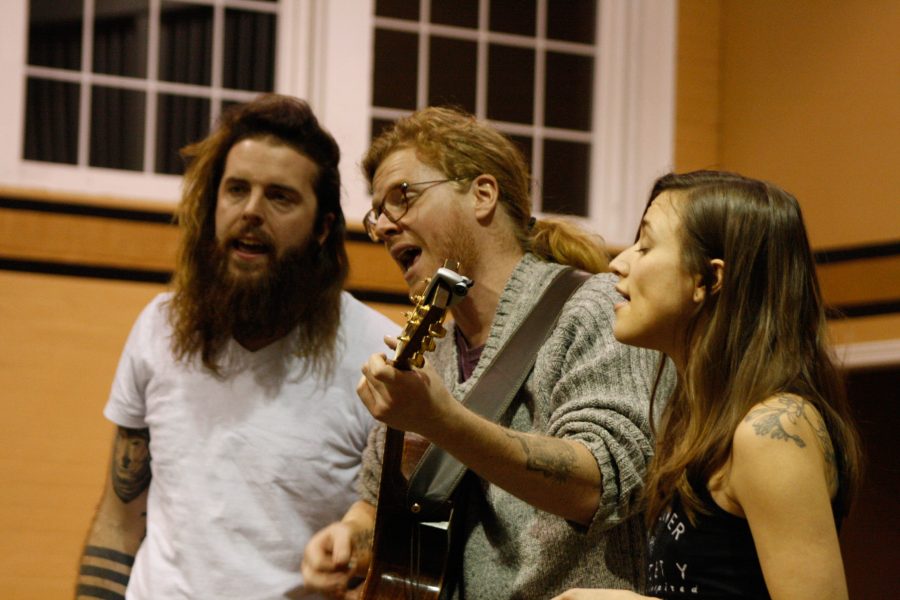 Folk rock trio The Ballroom Thieves performed at Lindenwood University Thursday night. The concert took place in Butler Loft at 7 p.m. as one of the activities that CAB had prepared for the Welcome Back Week.

“We wanted to bring something new to campus,” said CAB advisor Jennifer Devonshire. “We thought it would be a good break after the first days of classes and so everyone could come and listen to music.”

Due to technical difficulties, the trio decided to perform only acoustic songs. Around ten students enjoyed the more intimate concert as a result

Some of the songs performed included a love song called “Archers”, “Nobody Else” and the debut performance of new song “Silver Boy.”

Because of the small audience, the trio, made up of guitarist Martin Earley, percussionist Devin Mauch and cellist Calin “Callie” Peters, was able to break the ice with the audience, encouraging the audience to ask questions, voice comments and concerns. Within five minutes, Earley and Mauch were comfortable enough to ask the audience for permission to take their shoes off. They performed the rest of the show in socks.

At one point, Mauch asked the students about any notable alumni from LU. CAB member Morgan Riggs mentioned that Taylor Swift’s grandmother is an alumna, to which Earley joked: “I can feel Grandma Swift’s aura here!”

In between a couple of songs, the trio recounted “crazy adventures” of how Earley and Mauch started the group by taking a trailer, which Earley received as a graduation present from his parents, around the country playing music as a duo before Peters joined the group in 2013.

“I was very excited to play with them. The first time we played together was magical,” said Peters, who had graduated from Berkeley shortly before answering the duo’s prayers for a cellist. “The first day was so much fun, we all clicked immediately and it was amazing.”

The audience really enjoyed the concert, including Kyle Rainey who said, “It was fantastic…. I thought it was fun to have a more intimate show and they definitely deserve a bigger crowd.”

Despite the smaller crowd, The Ballroom Thieves also enjoyed the intimacy in the show.

“It’s cool to have intimate shows and they are special to us,” Peters said. “We like to talk to the audience and have them talk to us, instead of being untouchable. It’s music, it connects people and it doesn’t matter what language you speak, where you are from and we like to connect with people.”