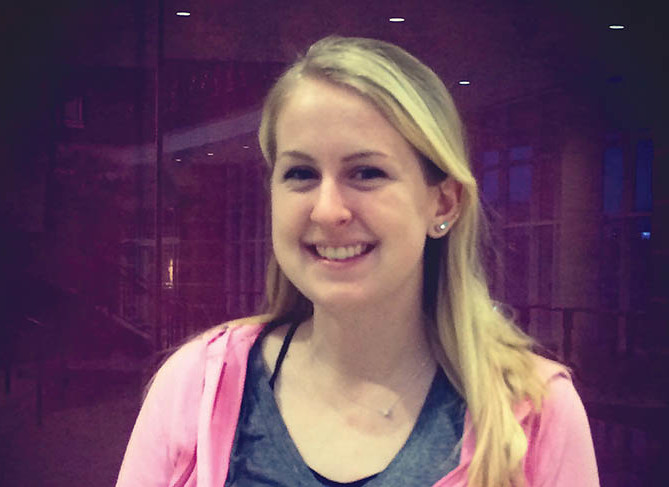 Photo by Jazmin del Angel Raithel poses in the lobby of the J. Scheidegger Center for the Arts.

To make a theatrical production possible, tremendous amounts of work are required backstage in order to accomplish the performance the audience will enjoy on opening night. It is the work of the stage manager, in conjunction with the director, to schedule and run rehearsals, communicate the director’s wishes to designers and crafts people, coordinate the work of the stage crew, oversee the entire show each time it is performed, etc.

The one who the Lindenwood University theatre department relies on for these responsibilities is Jenna Raithel.

“I am with the process from the first design meeting until the very last performance and sometimes we have another meeting in which we’ll discuss the show afterwards,” Raithel said. “I keep track of all the blocking, as well as the book. Sometimes when the actors forget their line, I’ll read it to them so they continue with the scene.”

Raithel is currently working on the musical “Violet” which is kicking off Lindenwood’s spring theatrical season and runs Feb. 19-20 and 25-27 at The Emerson Black Box Theater.

She said they also have production meetings where they talk about how the building of the set is going, how the costume shop is doing, how rehearsals are going.

“In a couple of weeks we’ll start our tech rehearsals,” she said. “That’s when we start adding lights and sound, and we’ll be working on the set. My job is to call the cues for the show. Every time a light goes on, a sound goes off, a spotlight comes on, I am the one telling the other crew members when to execute the action.”

The stage manager is also in charge of keeping the director’s vision in the performances, such as in rehearsals.

“For example,” Raithel explained, “if the actors keep saying their lines wrong, doing the wrong blocking, singing the wrong notes, then I have to make sure to say, ‘Hey, that’s not what we did on rehearsal, please go back to what we actually did.’”

Raithel started to get involved in theatre when she was very young and wanted to be an actress. When she got in high school she tried cheerleading, but quickly abandoned the idea.

“It was when I went to see the high school’s show [of] ‘Twelfth Night’ by Shakespeare and I thought, I hate being a cheerleader. I want to do theatre,” she recalled. “I started to work with the theatre department and started to work on the technical aspect of it instead of the acting. I wanted to be involved with the rehearsal process even if I was not going to be on stage.”

Once she started her BFA in Stage Management at Lindenwood, she got her first play as a stage manager during her freshman year.

“This is my fourth show I stage managed, and I have assisted stage management in other several shows as well,” Raithel said. “My first really big play was last year’s ‘Christmas Carol,’ with a huge stage and cast.”

After her expected graduation in May 2017, Raithel would like to tour the country with a show as a stage manager.

Last summer she actually managed to do so, traveling to Connecticut, New York and more for an internship with the traveling circus, Circus Smirkus. During her internship, she said, “not only did I do stage managing as a backstage manager but also hung lights, organized props, ran cables, etc…. It was the best summer of my life.”

With the first performance of “Violet” approaching, Raithel’s ambitions are only growing. She said, “I am hoping with this show I can just continue to keep making myself better as a stage manager.”

Editor’s note: An earlier version of this story had factual errors but has since been updated.