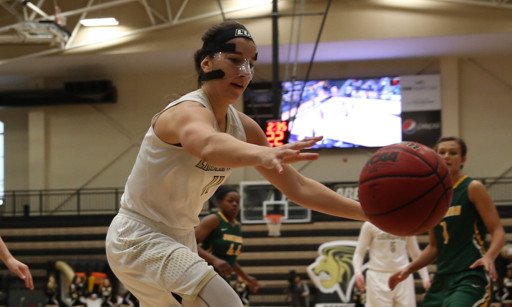 Vanessa Zailo struggles to catch a pass during the second half of the game against Missouri Southern State University.

Sometimes in sports, it can be hard to understand the importance of a player to a team until that player is forced out of the lineup, or an unfortunate injury occurs.

That has become the situation for the Lindenwood women’s basketball team and one of its best players, senior forward Vanessa Zailo, who has been dealing with a broken nose since early January.

Zailo came to the Lions last season from Sumerland, British Columbia, and immediately made a huge impact for the team.
During her first season, she led the MIAA conference with 13 rebounds per game, which also put her in the top five for all of NCAA Division II.

In what was the highlight of her season, she recorded an MIAA record with 27 rebounds in a game against Central Missouri.
In addition to these impressive numbers, Zailo started all 27 games for the Lions during the 2014-15 season and scored more than seven points per game.

Early on in this season, it was more of the same for Zailo, who recorded at least five rebounds in 14 of the team’s first 15 games this season.
She also recorded the biggest game of her career against Northeastern State, scoring 17 points and recording 21 rebounds.

Her season, and the team, took a big hit on Jan. 9 against Nebraska-Kearney, when Zailo suffered a broken nose in the middle of the game.
The injury required Zailo to miss two games against UCM and Southwest Baptist University, before returning on Jan. 21 against Pittsburg State, albeit in a limited capacity.

In the two games that Zailo missed with her injury, the team out-rebounded by a margin of 70-61.
Since returning to action, Zailo has been forced to wear a protective mask over her nose to protect her from further injury, and she has yet to be able to start or play extended minutes since the injury occurred.

Tony Francis, the team’s head coach, acknowledged that not having Zailo at full speed has been tough for the team, saying she is “a long way away” from being able to perform at 100 percent.

Prior to Zailo’s injury, the team had compiled a record of 7-7, spanning the entire non-conference part of the schedule and the first portion of the conference schedule.

Since Zailo left the game against Nebraska-Kearney, the team has gone 0-7 despite playing in a number of close contests, including a three point defeat in last Thursday’s game against Northeastern State.