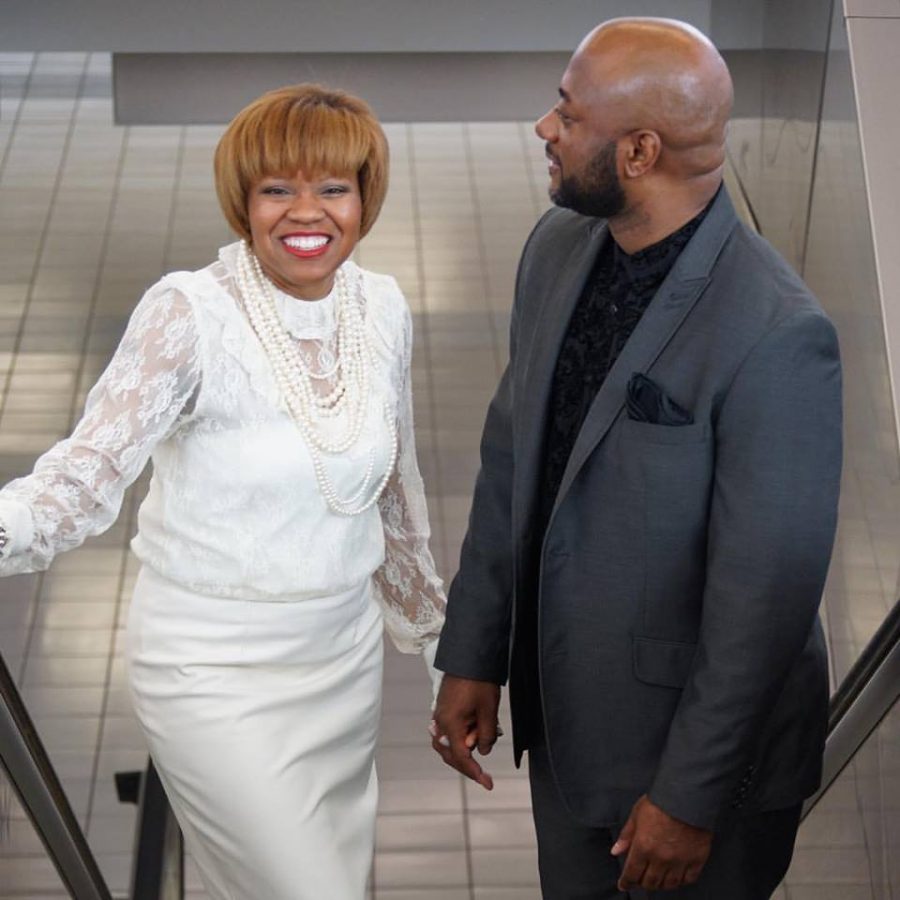 Whitney was his first love, but Nicci is the love of his life.

“When I first saw Nicci in her wedding dress, she looked like a goddess,” Walker said. “The most beautiful woman I’ve ever seen.”

Roach got the idea to get married in the airport after she read a news blurb about the airport looking to renovate unused space.

“When we checked out the venue, there was no doubt that this was the place,” Roach said.

Greatest Love of All

Walker met Roach at her father’s church, but it was at the airport where Walker first told his then-girlfriend that he loved her. Walker was dropping Roach and her mother off at the airport for a shopping trip to Europe last May.

“The airport isn’t just a symbol of journey but also transition,” said Walker.

Despite the fact that Walker and Roach have been a couple for only two years, a lot has happened in their short time together.

Around two months before the wedding, Roach’s father passed away due to muscular dystrophy. A week later while Roach and Walker were traveling to her father’s wake, Walker received a phone call from his niece that his sister had passed away suddenly of undetected respiratory heart issues.

“We were so restless by the time of the wedding because of everything that was going on,” said Walker.

I Wanna Dance With Somebody (Who Loves Me)

While many of the days leading up to the wedding were spent grieving, the time of the wedding was spent celebrating.

For Walker’s bachelor’s party, which was the day before the wedding, he went to a screening of “Star Wars: The Force Awakens.”

The wedding took place on Dec. 19 in Concourse B at the airport. Road said the 25,000-square-foot open space was completely decorated by Walker and Roach’s wedding planners.

“Everything looked like it was on clouds,” Roach said. Clear chairs were used to give the look that people were floating.

Walker and his friends, including his student at Lindenwood Shawn Wybenga, helped set up the interior for the wedding.

“When we set up the 250 chairs (for the reception) I thought there was no way they were going to be filled, but I’m glad we did because that still wasn’t enough for all the people that showed up,” Wybenga said.

A bet was made between Roach and Walker to see who would cry first at their wedding.

Walker and Roach planned to fly out the night of the wedding but didn’t until the night after so they could spend more time with friends and family.

“It was great to bring both families together and end the year on a good note,” Roach said.

They first went on a cruise to the Bahamas for three days before they flew to New York for four days, where they spent Christmas and saw the Broadway musical “The Color Purple.”

I Will Always Love You

Anyone who walks into Walker’s office will likely first take note of the large Whitney Houston posters hanging on one of his walls, one of which is signed, and the Whitney Houston wallpapers on his computer monitors.

Walker said that he is Whitney Houston’s biggest fan and that he views her life as a celebration rather than a tragedy.

During the wedding reception, a large screen was set up that projected Houston’s 2004 World Music Awards performance, along with a photo montage of Walker and Roach’s “journey together.”

Before he died, Roach’s father wanted live music to be performed at the wedding, and when Roach saw the video of Houston and asked why Walker didn’t find someone to cover her music, Walker gave her a serious look.

“Nobody will sing Whitney but Whitney,” Walker said. “I always wanted Whitney to sing a love song to us.”

Lindenwood’s nonprofit program is what attracted him to St. Louis from Virginia.

Walker tries to encourage his students to lean more than just the curricula.

“Enjoy this life,” Walker said. “These books don’t teach you everything you need to know in life.”