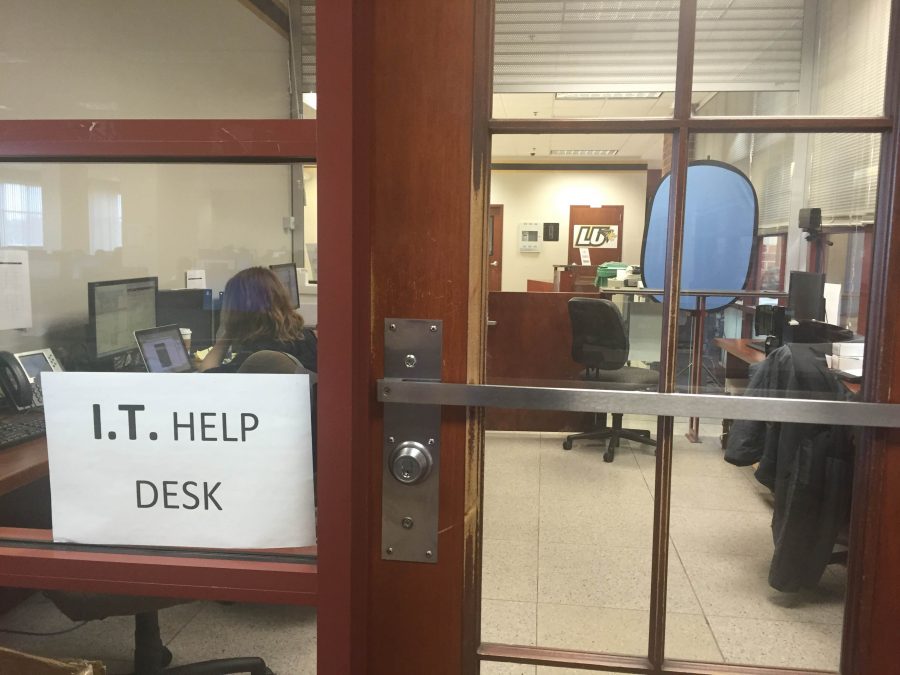 The I.T help desk is located on the third floor of the Spellmann Center.
Photo by Devin King

Information technology is undergoing a major update in many of its departments, including website redesigns and classroom technology fixes.

“Right now, there are things in IT that are broken,” Rains said. “We’re trying to deliver in a consistent fashion.”

During the meeting, faculty members addressed issues they have had with IT in the past, such as projectors not working in the classroom and times when the learning management system Blackboard was down.

Faculty Council Chair Patrick Walker has heard about IT concerns from his colleagues.

“I can’t really speak for myself, but for my colleagues, they have experienced issues with the computers,” Walker said. “We understand TJ inherited a lot of things he has to fix, and not everything is going to be fixed overnight.”

He also said some of the issues could be attributed to the users instead of the technology.

“Let’s be honest, what were we doing before there was PowerPoint?” Walker said.

“There’s going to be problems sometimes, and that’s OK,” Smith said. “[IT] can’t fix every single issue that happens.”

In an interview after the faculty council meeting, Rains addressed issues he has found involving technology since he came to Lindenwood last September.

“It seems like it was an organizational challenge,” Rains said. “[IT] is really hitting the road by addressing every issue directly, and that hasn’t been done in the past.”

Rains said that he and IT are currently working on fixing network services, application infrastructure and the experience on the current structure.

Of the network services, Rains said Blackboard has been one of the bigger challenges. This is why he is helping Lindenwood integrate Canvas as the new learning management system. Rains said that Canvas is more reliable and won’t go down as often as Blackboard did.

Rains said that IT is evaluating every application to see how well they work.

“We’re paying attention to classroom experience [to see what needs improvement],” Rains said. “We’re also taking the approach of a five-year refresh system, to make sure everything is up to date and works properly.”

The system is a plan to replace technology every five years.

In addition to IT’s current plans, Lindenwood’s website will receive a major redesign that will launch in September. Rains said that the third party Fastspot is working on the redesign.

“[Lindenwood’s website] is where people get glimpses of Lindenwood, and we’re working with creative designers to improve on it,” Rains said.
It will still be some time before IT launches many of its plans, but for now, they are focused on evaluating everything.

“We’re figuring out what needs to be addressed and will build a strong team from there,” Rains said.