Protests cause decline in Mizzou enrollment 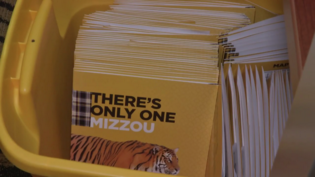 Enrollment rates at the University of Missouri in Columbia are a concern as applications come in for the Fall semester. The number of incoming freshmen is significantly lower than usual and the admission office is wondering if November’s protests are the reason why.

It became national news when Mizzou students partook in hunger strikes and boycotted classes last Fall. Even the football team threatened to not play if protester demands were not met. Students hoped to fight issues like racial tension, lack of diversity and graduate student rights.

Austin Cooper, a freshman at Mizzou, was in his first semester during the movement. In his eyes, the movement brought people together.

“The media portrayed that there was like a war, like a civil war breaking when realistically it was a few hundred to a thousand of all ethnicities gathered right behind here,” Cooper said.

Admissions started seeing the dip in applications around December. Assistant Director of Admissions, Patrick Elmore, said current students are re-enrolling. However numbers for incoming freshmen have taken a dip. He is confident there is still time to see more enrollment before the Fall.

“We don’t make final projections on that until late in the Summer. But right now we are down in applications, we are down in deposits from where we were last year. But to know how much it’s going to end up being we can’t say at this time,” Elmore said.

According to admissions the number of prospective students visiting is also down but current students say they don’t think people should count out Mizzou. Colette Rector, Mizzou Senior, said student morale is higher than ever.

“I think there’s a really cool feeling that students do have a say of what goes on at the university which is super awesome to be a part of that and to know my peers are the ones who kind of let that happen,” Rector said.