LU gets funnier after hours with new talk show 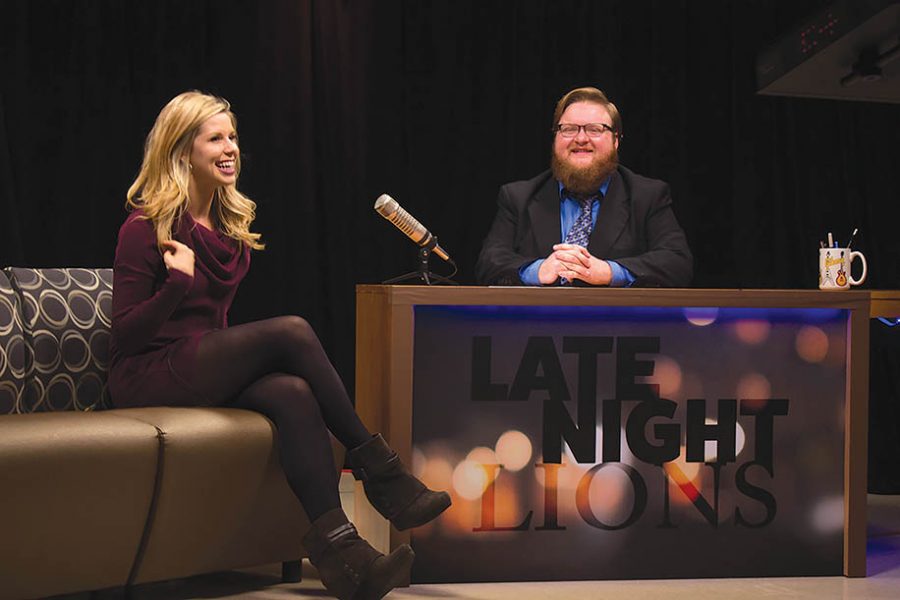 John Fisher and company are giving Lindenwood another reason to stay up.

“Late Night Lions” is a talk show filmed at the LUTV studio, hosted by acting major Fisher. It premiered on YouTube at 7 p.m. Monday.

“It’s the talk show version of ‘Seinfeld’,” Fisher said. “It’s the show about nothing, so we can do anything we want with it.” In addition to Fisher hosting, the show is a student-run production behind the scenes as well.

Communications students Rebecca Rockwell, Sam DeZeeuw and Jon Elam came up with idea at the beginning of the 2016 spring semester.
DeZeeuw said he really wanted to do something different at LUTV. He started joking about doing a sitcom and then Rockwell suggested a late night talk show.

“Jon and I were like, ‘Yes,’ but I don’t think Becca meant it seriously,” DeZeeuw said.

“I didn’t,” Rockwell said with a laugh.

“I don’t think any of us did at first actually,” Elam added. “It was one of those things where it’s like, ‘That would be very funny to do,’ and then… eventually it came together, and it led to this.”

Fisher said that the show has “borrowed” aspects of “The Tonight Show,” one being Fisher’s three-minute opening monologue. It also will feature weekly guests, the first being Lindenwood video blogger Alexis Kadey. Fisher said all future guests will be linked to Lindenwood.

“The show is called ‘Late Night Lions’ because we’re really gearing it toward the Lindenwood community, and we’ll talk about Lindenwood topics,” Elam said.

Regardless of the borrowed aspects, however, the brains behind the show want it to be a fresh take on the late night talk show and, as Rockwell described, “something for them to remember,” with segments that will include guest participation. This week’s show featured a segment called “Dramatic Yik Yak Readings.”

“We still got to find our niche,” DeZeeuw said. “Is it slap-stick, smart funny? We still don’t know. It is the first episode, and we’re going to figure that out, see what people respond to.”

“We’re not going to let it get stale,” he said. “We’re going to keep it fresh every week.”