“Zootopia” is a wild adventure 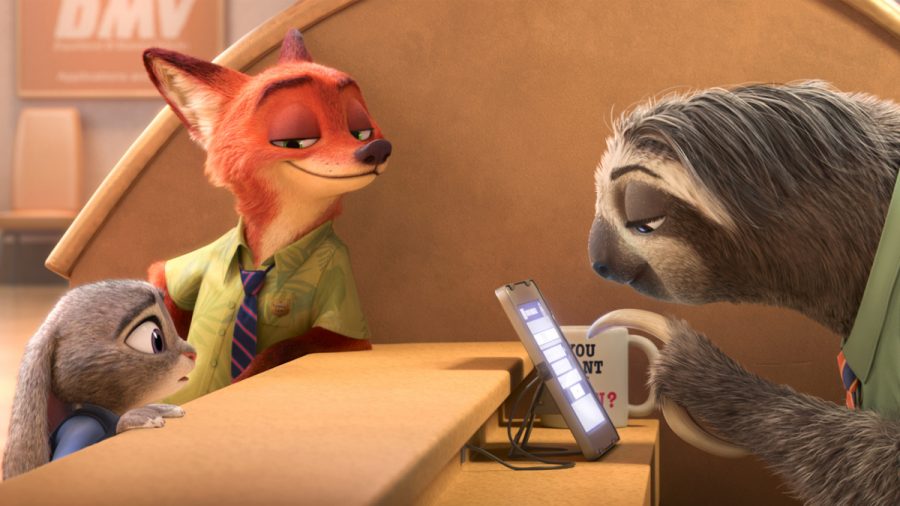 Everyone loves an adventure and “Zootopia” a grand one at that. The latest from Disney Animation Studios fits in excellent characters, humor and set pieces into one charming package, as what has come to be expected of the studio. However, there is more to this furry tale than what meets the eye.

Centering its story on Judy Hopps (Ginnifer Goodwin), a naive, new officer from a farm town, “Zootopia” is a classic “whodunit” mystery about a series of animals that have gone missing in the titular metropolis. As Hopps becomes accustomed to her new city life, she encounters Nick Wilde (Jason Bateman) a red fox who is a small-time con artist. Hopps and Wilde become unlikely partners, as Wilde has a connection to the mystery.

Zootopia might just be the liveliest place Disney Animation Studios has ever created. From the small hamster businessmen that appear to have big egos to the sloths that run the DMV as slow as possible, every small charming detail “makes sense,” as each animal is fitted with an appropriate personality.

There are many similarities between the residents of the real world and residents of Zootopia. The animals are constantly on their phones or obsessing with social media, which makes the city feel a bit more realistic. Also, the multiple references to pop culture, such as a shew which is a parody of Marlon Brando’s character in “The Godfather,” give more human characteristics to the animal cast.

As the mystery unfolds, there are twists and turns at every corner, even those that surprised me for being a film meant for a young audience. As Hopps and Wilde track the case, they are brought through a variety of different places, such as an arctic tundra and a rain forest, which gives their adventure a grander scale.

While it is impressive how many things the writers juggled with fleshing out the world and having a compelling mystery on top of it, there is also a very modern message that the film gives. While it is not exactly subtle, it does not spell it out 100 percent. The fact that a serious subject was tackled in addition to everything else the writers have done, the non-subtle message is very forgivable.

Coming off their latest movie, Disney Animation’s “Big Hero Six” was arguably the best-looking computer generated film at the time, and “Zootopia” carries the torch in the visuals department. While every set piece looks gorgeous, the most impressive aspect is the character animations. Not only do animals have very anthropomorphic movements to them, especially when they are doing activities humans do today, the animals also retain body movements that are still animalistic at the same time.

Speaking of the animals, every single character of the large cast adds something to the film. Hopps and Wilde never failed to put a smile on my face and neither did any other character. The reason for the great characters had a lot to do with the voice acting. There is so much lively energy that comes through every character that it feels like a stage play.

“Zootopia” feels more alive than most live-action films, thanks to the hard work put in by its creators. It is a film that anyone can go back to, and find something new about the film that they did not realize before. Anyone of any age can enjoy this wild adventure as these is so much that can be taken from it.