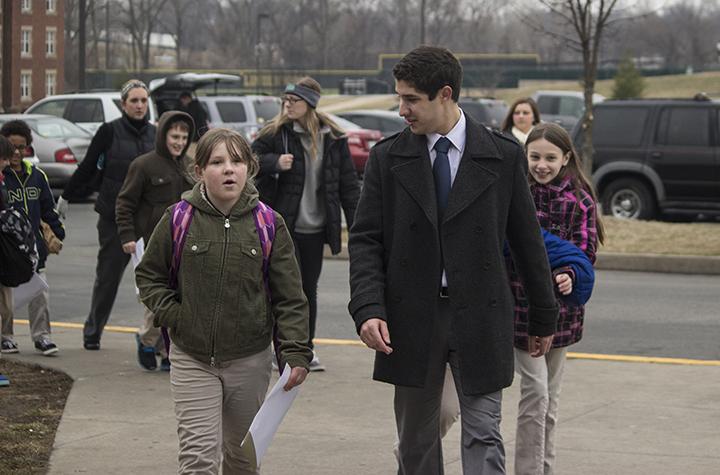 For many prospective students, their first impression of Lindenwood is tied to the person who gave them a tour of campus.

These tour guides, called student ambassadors, are not just a way to convince people to enroll but also are meant to educate guests about the history of Lindenwood.

Rafael Bolognini, who is a junior from Brazil with a triple major, has been a student ambassador since August 2014. He said he likes the opportunity to represent the university and meet a lot of people.

“We get to know people who come here before everyone else,” he said. “That is pretty exciting.”

The process of becoming a student ambassador is more difficult than most student worker positions. During the application process, potential ambassadors also must send a resume to the student worker office.

The candidate’s GPA will be checked, and an interview will be conducted at the end of the process.
Ideal candidates are those who are well-informed on information about the campus, its history and Lindenwood in general.

When hired, ambassadors receive a manual with facts they need to know and communicate during the tours, such as the average number of students in a class or the campus size.

Currently, 18 ambassadors who conduct three to five tours a day are employed in the program.
Tours can take as long as one hour to complete.

Of the people who receive tours of the campus, 60 to 70 percent of them are from the St. Louis area. Only a few international students get a chance to visit the campus.

According to Bolognini, parents who attend the tours often are very concerned about their kids and tend to ask what might be perceived as embarrassing questions.

“I have been asked if guys are able to get into the girls’ housing, and the parents are usually happy with the current visitation rules,” he said.

Overall, the tours and the campus are usually well received by students and parents.
“They mostly love it; most of them didn’t realize how big Lindenwood is,” Bologini said.

For more information on becoming a student ambassador, go to the library page on Lindenwood.edu.