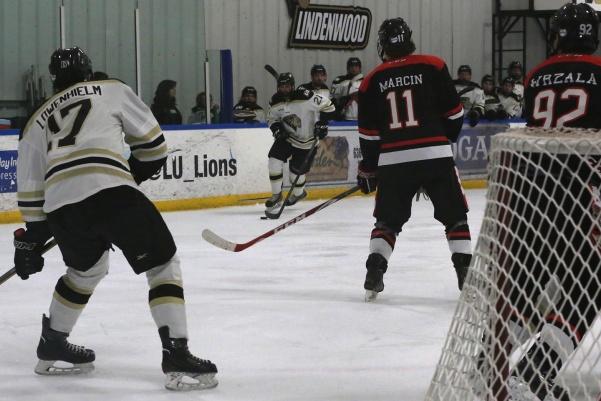 Adam Newkirk (21) sets up for a pass to Christoffer Lowenhielm (17) while playing against Illinois State University.

Shutting out Oklahoma University in a dominating quarterfinal win on Sunday, the men’s hockey team has skated into the next round of the American Collegiate Hockey Association’s Division I National Tournament.

Lindenwood will now face Davenport University in the second of two semifinal games at the Edge Ice Arena in Bensenville, Illinois on Mar. 7. Puck drop is scheduled for 8 p.m.

The last time the two teams met was on Nov. 14 in Grand Rapids, Michigan. Losing the game 3-2, the Lions gave up two power play goals while only scoring on one of seven of their own attempts. LU holds a 1-1 record against the Panthers this season.

If the Lions advance, they will face either Stony Brook University or Iowa State University. The two potential opponents will face off in the first semifinals matchup at 5 p.m.