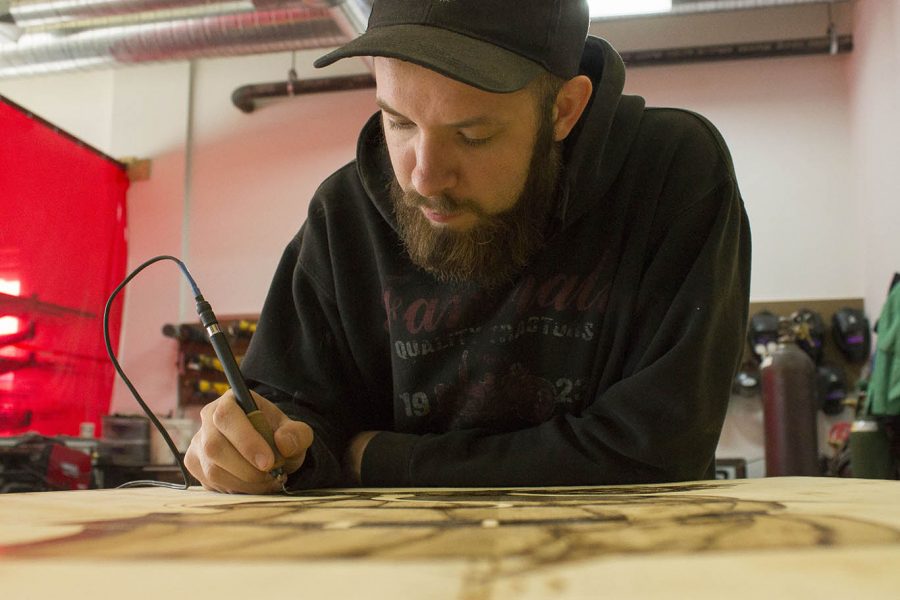 Photo by Sandro Perrino Graphic design major Zach Baker burns his pirate ship into a plank of wood, a hobby of his.

Zach Baker, a senior graphic design major, has gone beyond his curriculum and developed a passion for woodworking.
Baker is also pursuing a minor in studio arts, which has allowed him the studio space to pursue his hobby.

“To me, it’s relaxing,” he said. “So, if I’m struggling with school, I’ll go build something. It makes me feel better.”

Many of Baker’s projects stem from merely seeing something that inspires him and then researching how to make it for himself. He also makes an effort to use reclaimed wood.

“I’ll gather old wood and restore it into something new,” he said. “It’s a lot more work, but I enjoy that more just because something that’s trash can be reused.”

Baker has been working with different art forms his entire life. His family is very creative as well and participates in different kinds of creative outlets.

“Me and my brother do a lot of woodworking, but my sister is a hardcore dancer,” he said.

Though Baker loves his art form and is constantly experimenting with new techniques, he is pursuing his degree in graphic design as a source of steady income in order to sustain his real passion.

“To be a successful artist alone you have to be really creative,” he said. “I really enjoy it as a hobby or side project, but I don’t necessarily see it as a future or something reliable.”

Though he never intended his art to make money, Baker does sell some of his projects upon specific request.

“I would love to have my own shop someday, but not necessarily for business reasons,” Baker said.

Because Baker is an undergraduate, an exhibition at school is not an option. However, he self-publicizes his work on his Instagram account (@artistic_side) where he also posts time lapses of projects he works on. Recent projects include wooden bow ties and a wooden poster plate depicting a pirate ship.

“I really enjoy making things from the ground up,” Baker said, “so I have an idea or I see something I really want [and] instead of buying it, I’ll think of a way to make it myself.”