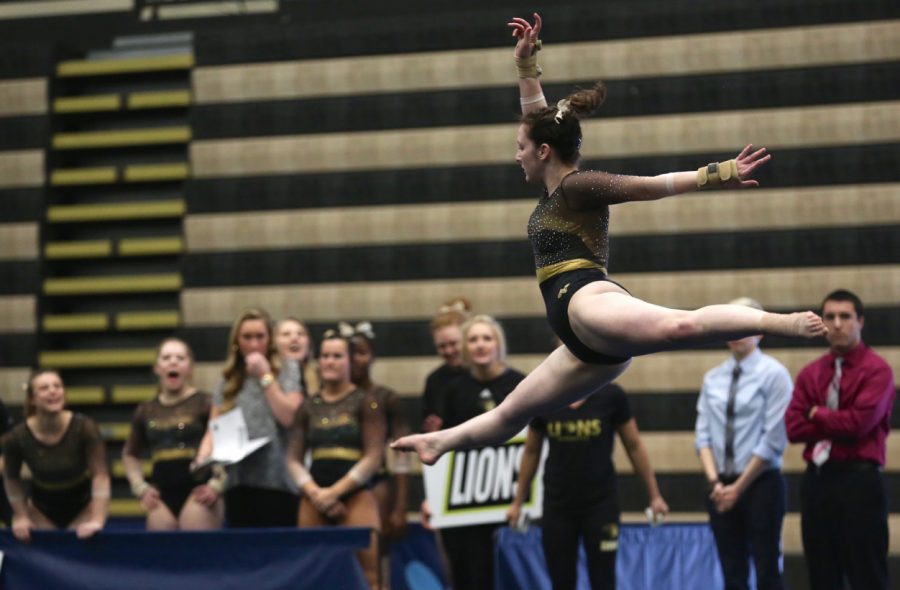 teammates cheer on Shaylyn Garay as she performs her floor routine.

The Lindenwood gymnastics team will compete in its final Midwest Independent Conference matchup this weekend. They are set to take on the Centenary College Ladies of Louisiana on Friday at the Hyland Arena.

Going into the meet, the Lions are averaging a total team score of 193.23 compared to the Ladies 189.28. Lindenwood is also outscoring their rival by an average of at least a point in each of the four events.

The Lions are coming off a long road weekend in California where notable performances from Andavea Alexander and Rachel Zabawa helped the team tie the third-best program floor score of 49.000.

As a whole, the Lions took fourth at the California Quad Meet, behind twelfth ranked California, Southern Utah and Michigan State.

Head Coach Jennifer Kesler said that the team is highly focused on consistently hitting a score of 195.00, which was a benchmark qualifying number for regionals last year. The Lions highest mark so far was a 195.325, which is higher than any other team in conference.

They are currently ranked first in the MIC, ahead of Division I schools Southeast Missouri State, Illinois State and University of Illinois-Chicago.

This will be the Lions final regular season home meet at the Hyland Arena, but there is a chance for at least some of the team to enjoy another home court advantage next month.

The university is set to host the USA Gymnastics Women’s Collegiate National Championships April 8-10 at Hyland Arena, allowing those who advance to compete in St. Charles one final time this season.