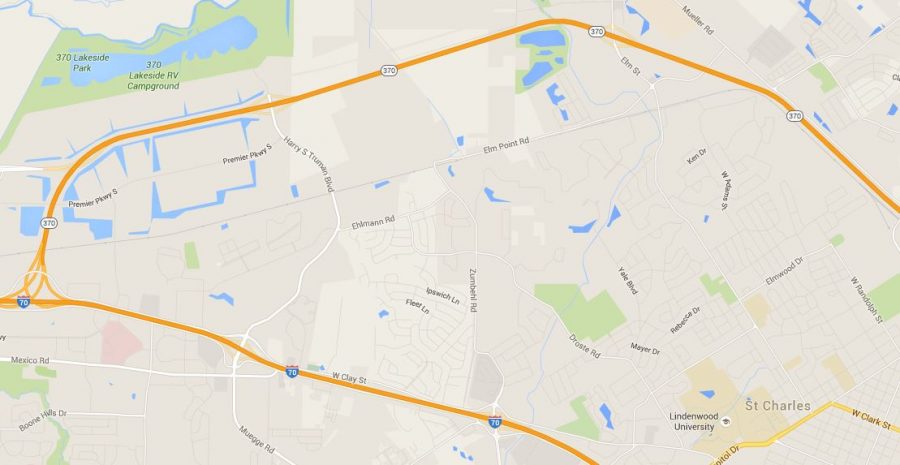 Photo from Google Maps The location of the 5K run Saturday to benefit the Starkey Hearing Foundation.

Devastating injuries suffered in a car crash started a new mission for Lindenwood junior Brittani Anderson. The crash, which happened four years ago, left Anderson with 70 percent hearing loss in her left ear and brain damage. Anderson had to get a hearing aid during her senior year of high school and she was nervous about wearing it.

“I thought my life was over,” she said. “I thought nobody would like me.”

Things started changing for Anderson during her first semester at Lindenwood when she tagged along with a friend to a sorority recruitment event for Delta Zeta. She was surprised to learn that the sorority’s national philanthropies include the non-profit Starkey Hearing Foundation. The foundation travels around the world and provides hearing aids for those who cannot afford them, said Casey Jones, philanthropy chair for Lindenwood. The foundation also has hearing aid recipients go through different training and helps people with their speech after the hearing aid is given.

“It was something I really wanted to be involved in,” Anderson said.

Lily Butterbrodt, president of Delta Zeta, said the national chapter has launched an initiative to donate $5 million to the Starkey Hearing Foundation in the next five years. The Lindenwood chapter of Delta Zeta has scheduled several events to help reach that goal.

Last fall, the sorority held a flag football tournament that brought in a few thousand dollars. During February, it sold raffle tickets for gift cards from Dick’s Sporting Goods and Lilly Pulitzer. This month, the alumni chapter of St. Louis is holding a 5k run on March 19 at Lakeside Park in St. Peters.

“We’re trying to make it a big event,” Butterbrodt said.

In April, the sorority is holding its third annual Delta Zeta Wigs Out. They will be sitting in the Evans Commons, taking donations in the form of eight inches of hair for Pantene Beautiful Lengths, a program that donates free real hair wigs to women battling cancer.

“It’s my favorite philanthropy event because you’re actually donating a part of yourself rather than just giving time or money,” Butterbrodt said. “It’s really selfless to donate your hair and give it to someone else.”

Butterbrodt’s goal is to have 30 donations, which is 10 more than last year. Anderson said she is not sure about donating her hair, but she is excited for the 5k race and is committed to raising awareness about hearing loss.

She said, “You don’t know what you’ve got until it’s gone.”