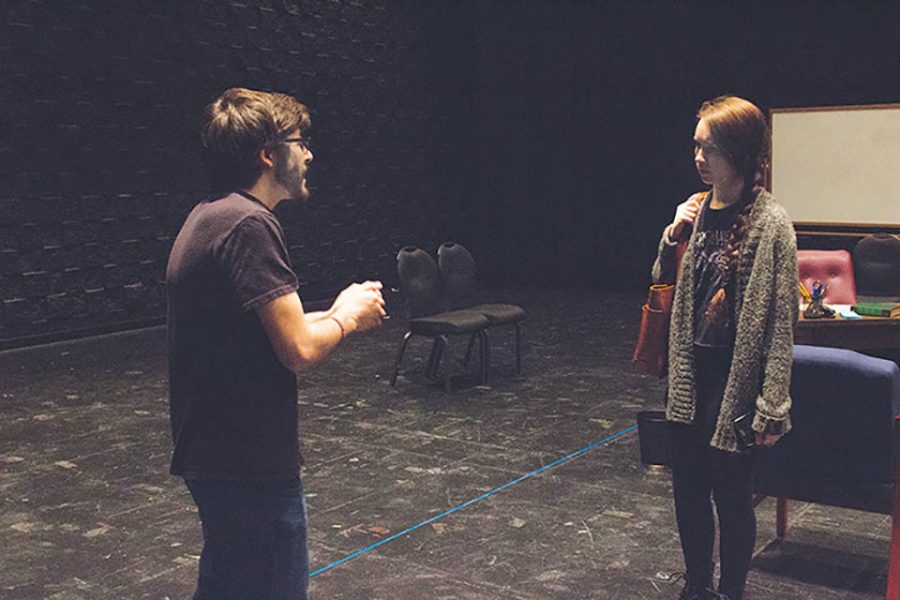 “Oleanna”, a two-character play by David Mamet is showing at Lindenwood’s Black Box Theater March 17-19. The show will take place at 7:30 p.m. and is free to the public.

Graduate student Rosie Portillo is directing the show about the power struggle between a university professor, John, and his female student, Carol. Portillo chose this play because of the experience it will provide for the audience.

“I really like doing shows that have an inherent message to the audience and makes them have to engage,” Portillo said.

She explained the importance of the author’s writing style, due to the fact he concentrates on every detail, stating, “David Mamet is known for his text because he puts intent into every word that he writes. So, every single world is really important.”

Sophomore Jake Blonstein plays John. He believes that audiences should be ready to be challenged.

“I think the audience should be ready to use their heads,” he said. “This show isn’t one of those plays you can go and see without thinking long and hard about what you are watching.”

Currently, Blonstein says he is preparing to deliver a thought-provoking performance. He added, “I want people to be shocked and have to think about what they are witnessing.”

Freshman Sierra “CeCe” Day stars as Carol and states that this play touches upon issues that are pertinent to today.

“I think right now it is extremely relevant with what’s going on in our society,” Day said. “Just about the women versus men issues and all the tension there.”

As for the rehearsal process, Portillo said that she really enjoys and appreciates working with her actors.

“They’ve really taken the material and internalized it in a way that has surprised me a lot of times,” she said.

One of the aspects Portillo acknowledges the most is that both Day and Blonstein bring different choices and perspectives to the table.

“They come up with ideas or thoughts about the characters that really make it their own, and it’s beautiful to watch them interact,” she said.

For the performance, Day believes that it is up to the audience to make this experience worthwhile.

“The audience should expect to leave with a lot of questions and leave feeling internally confused,” said Day, “but hopefully it will get them thinking.”

As for Blonstein, he is intrigued about how it will all turn out. He said, “I think it’s an interesting look into how we communicate with each other and how we can all interpret situations from completely different view points.”