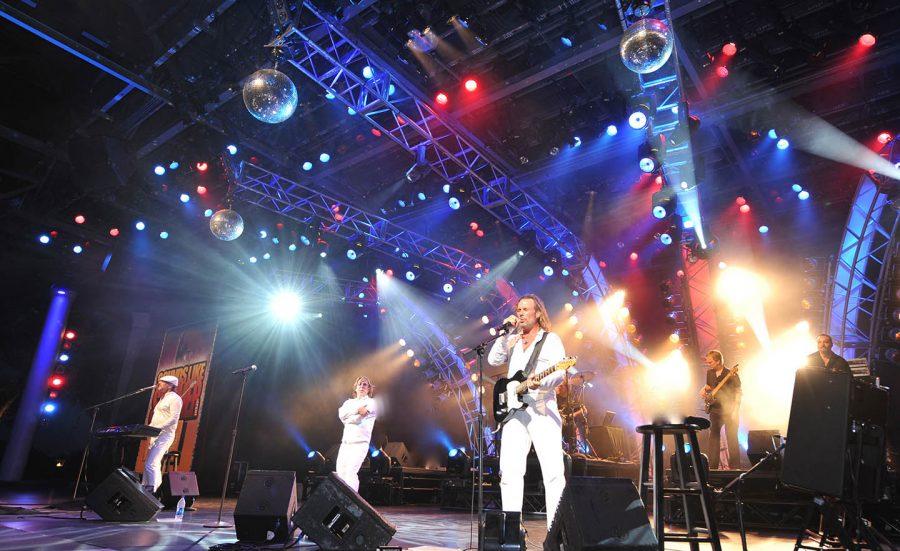 The J. Scheidegger Center for the Arts was taken back to the golden age of the disco with an outstanding performance by Stayin’ Alive. The Canadian Bee Gees tribute band took the Lindenwood Theater stage in a nearly sold-out show, with a crowd of some dressed for the occasion in “disco” attire, Saturday, March 19.

“Nobody was really doing it at the time and the Bee Gees were no longer performing because their brothers passed away,” said Todd Sharman, who takes the place of Robin Gibb on lead guitar and backing vocals. “It is a difficult thing to do, the Bee Gees music, and we thought, ‘Well, we can do this very well, we can bring music to the people.’ They got a huge fan day and then we decided: ‘Well, let’s do something that no one else is doing.’”

The band opened with the energetic “You Should Be Dancing” and the audience was already clapping to the rhythm.

Their set list did not only include the disco classics such as “Night Fever”, “Jive Talkin” and “Nights on Broadway” but also softer ballads such as “Massachusetts”, “Words”, “How Can You Mend a Broken Heart” and more.

The production set the right mood with the disco balls on stage reflecting all over the auditorium and the retro visual designs of the era projected on stage, as well as original footage and photos of the Bee Gees. Before returning for their second set, a clip was shown of “The Barry Gibb Talk Show”, a recurring “Saturday Night Live” sketch starring Jimmy Fallon as Barry Gibb and Justin Timberlake as Robin. After finishing the second set, the band came back by popular demand from the loud audience and closed with “Night Fever” and a reprise of “You Should Be Dancing.”

Sharmann was also happy with the result of their performance. “I liked it, they finally got up and danced!” he added.

Lindenwood alumnus Victor Avellino, of the class of 1985 enjoyed the performance and coming back to his alma mater.

“It was wonderful,” Avellino said. “It is great to come back to campus and of course, the music was wonderful.”