LU nursing school is coming back to main campus 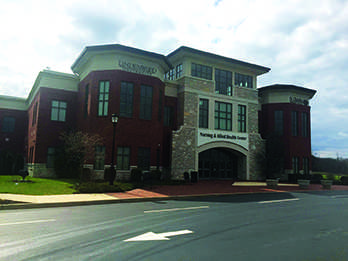 The LU and SCC Nursing and Allied Health Center is on the market to be sold, according to President Michael Shonrock.
Shonrock said the decision was made to bring Lindenwood programs back onto its St. Charles campus.

Currently, nursing and other health science courses are taught in this building, which is situated near Highway 40 and Winghaven Boulevard.

The 69,000-square-foot building was purchased by Lindenwood in September 2012, and St. Charles Community College leased 26,000 square feet of the building’s space under terms of the agreement in March 2013.

It is currently unknown what will happen to the St. Charles Community College portion if the building is sold.

The building was the former site of Barat Academy before Lindenwood purchased it.

“There will be no more [nursing and allied health sciences] classes taught there,” said Peggy Ellis, the director of the program.

The program, which began in the fall 2013 semester, will be moved onto the St. Charles campus next semester according to Ellis.

“We don’t know where classes will be [on campus], but we will go where there is open space,” Ellis said.

Ellis said there are no potential buyers just yet, but the decision to move the program to the St. Charles Campus was announced last month.