An old school experience with ‘Everybody Wants Some!!’ 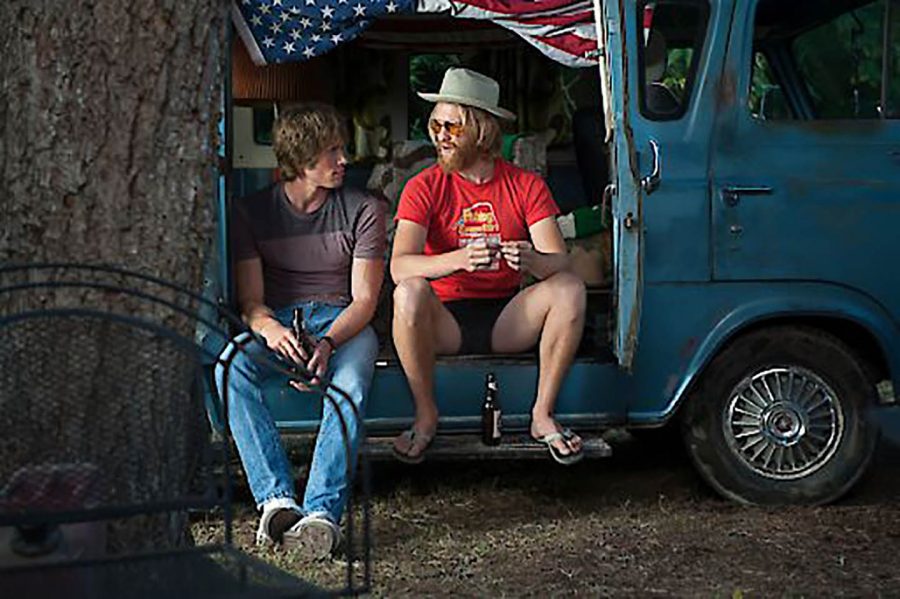 Photo courtesy of APA-OTS from Flickr. Jake (Blake Jenner) with Willoughby in his van.

Ryan Guzman and Tyler Hoechlin, stars of “Everybody Wants Some!!,” are fitting to be cast as members of a college baseball team, having played the sport during their real-life college years. The film, funny enough to be considered a comedy but relatable enough to be a drama, is set in 1980 at Southeast Texas State University and is a loosely autobiographical account of writer-director Richard Linklater’s college experience. However, the most arguably ideal casting may have been of an actor who never went to college.

“I didn’t have a college experience, so I got to approach it with that void of experience in that regard,” said Blake Jenner, who also played football in high school, rose to fame after winning the second season of “The Glee Project” and now plays pitcher Jake Bradford in “Everybody Wants Some!!” “This is definitely the freshman year I never had.”

The story is told through Jake’s point of view, putting the audience in the freshman perspective. He opens the film driving an Oldsmobile to The Knack’s “My Sharona” on the road to the off-campus house that he shares with his teammates. His initial introduction to the team is bewildering, to say the least, first bumping into seniors McReynolds (Hoechlin) and Roper (Guzman), who see Jake’s pitching skills as “a necessary evil.” Their immediate dislike in Jake is to them, a responsibility of theirs to toughen up the new members.

“I remember going to into college and being like, ‘I don’t really have to search for a group. It’s the baseball team and I’m feeling really good about it, even though half of them are a–holes,’” recalled Guzman, who is also known for his roles in the most recent installments of the “Step Up” franchise. “You bump into those guys. I had those guys when I first came in. They would do a lot worse than what we show on the film. But it’s one of those things where you get to live a certain part of your life over again in a manner you want to control, that you can control. Not many of us have that.”

Prior to its theatrical release on Friday, April 8, “Everybody Wants Some!!” has already drawn comparisons to Linklater’s 1993 classic “Dazed and Confused,” which successfully held a mirror to the 1970s teen culture through an ensemble cast of young rising stars celebrating the last day of school. It is even being marketed as the “spiritual sequel” to “Dazed.” Though it provides a window into the life of a collegian during the generational shift between the ‘70s and’80s, Guzman, Hoechlin and Jenner refrain from thinking of the film as “Dazed in the ‘80s.”

“Obviously, they’re both inspired by Rick’s life,” said Hoechlin, who has starred in popular series such as “So, I think that’s kind of the correlation of it, but… we really didn’t ever try to emulate anything. We never wanted to try to live up to anything that ‘Dazed’ was. It was never a discussion on set.”

“We focus on the freedom that is available to you in college rather than when [Linklater] talks about ‘Dazed and Confused,’ it’s more of like, succumbing to other people’s will and being chased around. This is the opposite of that,” said Guzman. “It’s its own movie.”

The odd bunch of characters take full advantage of that freedom, including the right to drink alcohol at 18, which still existed in 1980. As the group engage in nightly bouts of debauchery with subtle and charming moments of downtime by day, Jake becomes visibly more accustomed to his surroundings at steady pace with the audience’s familiarization with how college baseball players kept busy in the ‘80s. The smooth transition is achieved by instantly memorable supporting characters such as the fast-talking Finnegan (Glen Powell), wise and supportive upperclassmen Dale (J. Quinton Johnson), spacey, cosmos-obsessed stoner Willoughby (Wyatt Russell, the son of Kurt) or Jake’s roommate Billy Autry (Will Brittain), a walking southern stereotype whom the team will only refer to as “Beuter Perkins.”

In lieu of classic college-set films of the “National Lampoon” persuasion, the camaraderie depicted in “Everybody Wants Some!!” rarely steps too far out of reality. This is due in part to the fact that the fun that is seen was, according to the cast, genuine on and off set.

“I think everyone had the right amount of support throughout the whole thing between us and Rick (Linklater), but the one challenge was not focusing on the clock because nobody wanted it to end,” Jenner recalled, inciting nods from his co-stars. “And once it hit, like, the last week, you felt that. Guys were showing up for scenes they weren’t even in.”

According to Hoechlin, Linklater maintained an easy-going environment on set, even allowing the cast to go off script.

“We rarely even discussed the movie at all,” he said. “I think, maybe, we’d ask Rick a question about it here and there.”

“He would change things on the dime for us if he believed in it,” Guzman added. “That kind of trust, you don’t get that from many directors and it’s a beautiful thing because it makes everybody feel at ease and dive in a little bit deeper.”

Linklater directed an ensemble cast of young actors in “Dazed and Confused,” most of which went on to have lasting careers on screen, such as Academy Award-winner Matthew McConaughey and “Batman v Superman’s” Ben Affleck. With his STU baseball team roster, along with rising actress Zoey Deutch, perhaps the director has struck career-making gold once again.