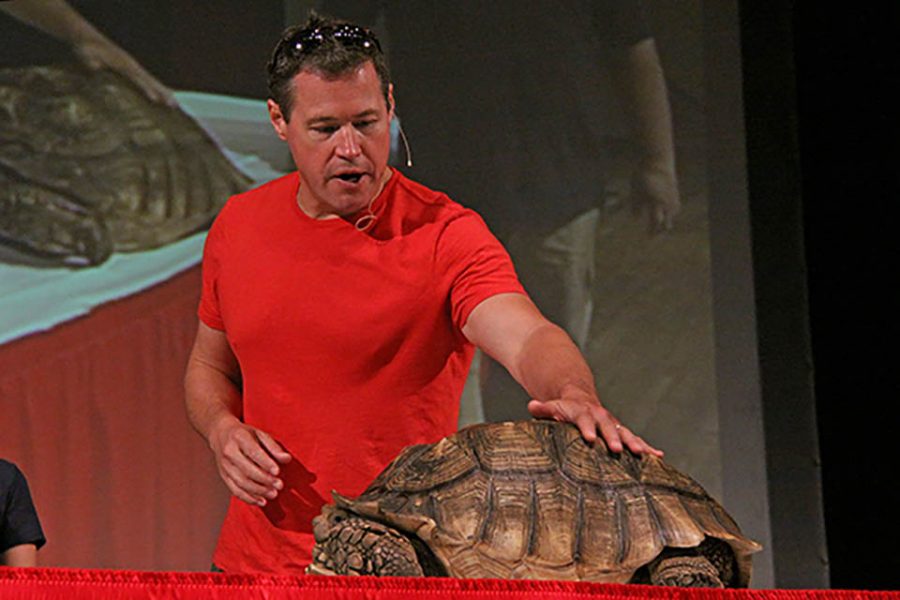 The world famous wildlife conservationist will bring a zoo of interesting creatures to the J. Scheidegger Center Tuesday, April 12 at 7 p.m. In this Q&A, Corwin speaks about what to expect from his show, his thoughts on the current state of conservation and his own life in the wild.

What are some of the animals you are bringing to Lindenwood?
I like to keep it a surprise, but the creatures I will be bringing are incredible. They represent some of the most mysterious and fantastic of the natural world. Certainly many of them are my favorites. Again without giving it away, expect lots of scales! And maybe a fang or two! I try to have a lot of diversity in the presentation, and not only to highlight amazing creatures, but also their powerful stories of their place in nature and timely conservation issues.

What is it like speaking at schools with animals?
I have a lot of fun. It’s great to take my field experience for making my TV shows and having that intimate experience of sharing those adventures with the audience, especially with really fun and exciting creatures that help to make the story even more exciting and engaging.

You’ve been to many places all over the world. Were there times when you were nervous because of the place you were at?
Sometimes, but not because of animals. Mostly because of social instability. Filming in countries that are experiencing war or political strife or being in a plane that is having malfunctions way up in the air and you’re about to make an emergency landing. That’s far more scary than any animal experience I’ve encountered over the years.

Off the top of your head, what is most magnificent thing you have ever witnessed while traveling?
There have been so many things I’ve witnessed that have really become powerful memories for me and have inspired me. Recently filming “Ocean Mysteries.” Probably being on the beach in Costa Rica assisting a giant leatherback sea turtle with her egg laying process, relocating those precious eggs to a special sanctuary in nursery and then being there when the little gorgeous hatchlings hatch out and liberating them back to the ocean. That is one of many amazing memories that I get to share with my audience.

As someone who has been an animal and nature conservationist for many years, how do you feel conservation is currently being viewed by the majority of people?
I think there are both positive and negative elements to conservation perception amongst the public today. I think people get why we need to protect nature and wildlife. There are a lot of species out there that have been historically vilified that now are being recognized and protected. For example, sharks. But many of us fail to recognize the negative and long-term impact of climate change, which I see every day in the field. And I think right now we are so wrapped up around politics that we forget we live in a world where every half an hour a species becomes extinct.

Your most recent show “Ocean Mysteries with Jeff Corwin” has a focus on aquatic habitats. I do not recall your past shows having a major focus on marine biology, so how did the decision to do a show focused on this come about?
Yes, “Ocean Mysteries” is a new focus for me. The show is very popular which makes me excited. We reach millions of people every week. Oceans are in trouble. Oceans are so important to the health of our planet. We all depend on oceans, yet we know so little about them. That’s why I’m doing this series. It’s new for me, and perhaps it is new for my audience.

How do you like doing a show like this?
I love doing the show, new adventures, new creatures, new stories!

You’ve seen all sorts of amazing animals, but is there anything you want to say about the noteworthy people you’ve met?
My career has allowed me to meet some really amazing people. I’ve met past presidents of our country. I have met famous and profound conservationists like Sylvia Earle and Jane Goodall. I’ve even gotten fan letters and inquiries from famous celebrities. But, perhaps the people I enjoyed meeting the most are the people on the front lines of conservation that help me tell the stories near and dear to my heart that I believe will engage my audience into being better stewards for our planet.

In your opinion, what is the biggest problem happening in animal and nature conservation today?
Habitat loss, climate change and unsustainable species exploitation is leading to the biggest level of extinction since the dinosaurs were wiped out 60 million years ago. They’re challenging problems, but they are fixable, but only we can fix it.

Any future plans you have for you career that you can talk about?
I just had a large format IMAX-style film come out called “Expedition Chesapeake.” We are now organizing for season six for “Ocean Mysteries.” There’s lots of balls up in the air, lots of fun wildlife and adventure projects in the future to share with my audience.