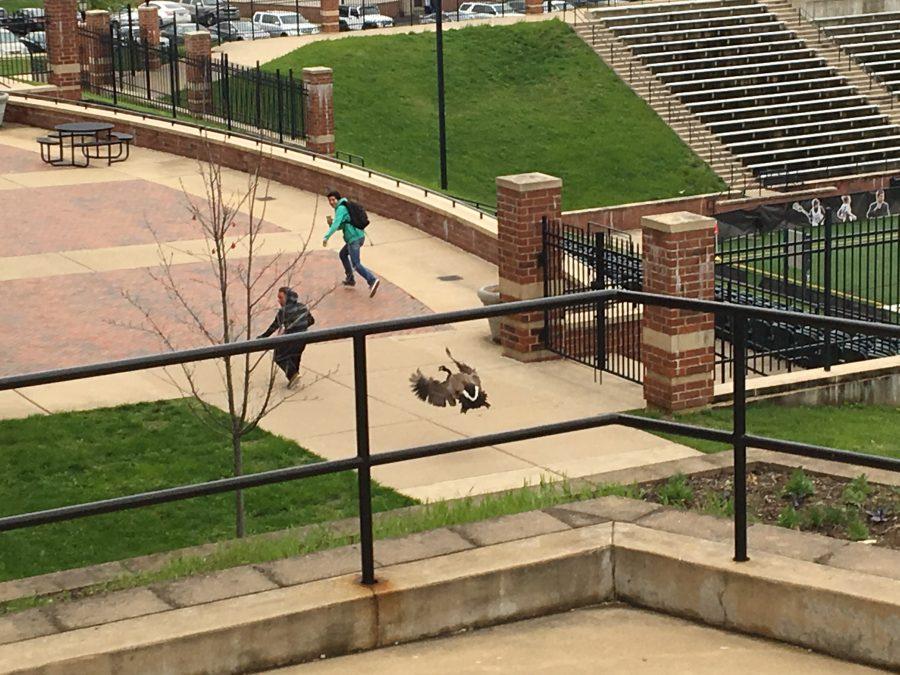 Students run away while being chased by a goose at the back of spellman.

Canada geese are not only nesting on Lindenwood’s campus this spring, they have attacked numerous students who got too close to their nests.

Members of the women’s lacrosse team said they have had almost daily run-ins with one goose couple that hangs out at Hunter Stadium, and a compilation of Snapchat videos posted on Facebook last week went viral. It showed several students being attacked behind the Spellmann Center.

Marissa Ortega, a junior fashion design major said she almost fell victim last month while heading to her dorm, McCluer. She had heard about other students being attacked, so she was cautious.

“I was walking with my headphones in, so I wasn’t paying attention, but I saw them coming towards me real fast,” she said. “I just ran away. I didn’t want to be next.”

A recent Lindenwood press release warned students, faculty and staff about the geese’s behavior and reminded those coming in contact with them that they are a federally protected species. Non-compliance can result in fines ranging from $5,000 to $10,000.

Dan Zarlenga, St. Louis regional media specialist for the Missouri Department of Conservation, said the geese are aggressive because they are laying eggs and raising young.

“The problem will eventually take care of itself when the young get older,” he said.

The current geese population is abundant because of a restoration program the Missouri Department of Conservation enforced in the 1940s and ’50s, he said.

Scott Vanhook, a sophomore majoring in sports management, said he recently was jogging around the lake behind Hyland Arena when he decided to stop and snap a selfie with the geese.

He said he was pretty close – about three arm’s lengths away. When he clicked the photo, the noise startled the geese. One of them lunged at him, he said.

“They looked harmless, but that obviously wasn’t case,” he said. “I stepped into their environment, so I guess they felt the need to protect themselves. I definitely get why they came at me.”

The attacks are not new; they’ve been happening around campus for years.

Student Natalie Peterson said around this time last year, a goose attacked her and her roommate, Miranda Motes, on the path by the cemetery.

“There was a nest on top of either Niccolls or Sibley, and one of the geese decided to swoop down because it thought we were going to take its baby,” she said. “We got away from it, but they’re pretty fast and vicious.”

Zarlenga’s advice is to avoid the geese until about June, when the young have grown enough to be independent.