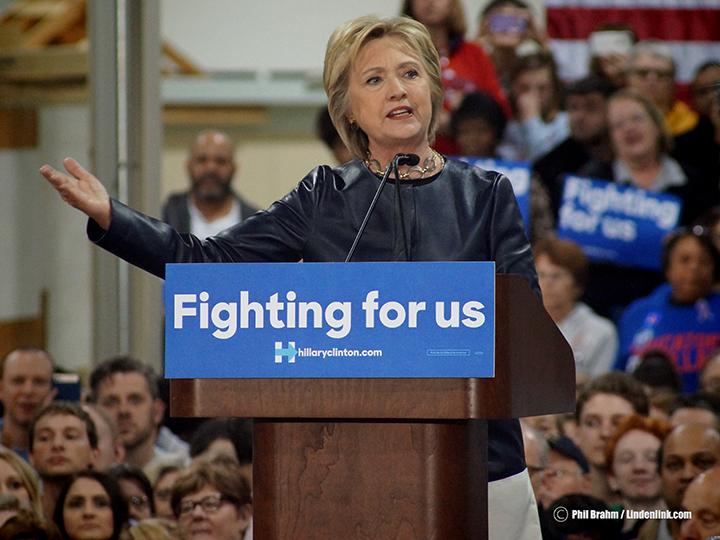 Hillary Clinton supporters filled the warehouse of the Nelson-Mulligan Carpenters’ Training Center in Affton, on Saturday, March 12. With just a few days until the Missouri Primary, Clinton supporters believe they know what is at stake concerning the 2016 presidential election.

“This is the most important election of my lifetime,” Joan Lipkin, Hillary Supporter, said. “I was at the Trump rally yesterday and it was nothing but an example of bigotry and hatred and initiating people to violence and divisiveness. And [Hillary] is all about bringing people together.”

In her speech Clinton addressed the Donald Trump Rally in Chicago which was shut down the night before he was set to speak. The shutdown was due to security concerns.

“The ugly, decisive, rhetoric we are hearing from Donald Trump, and the encouragement he has given to violence and aggression is not only wrong, it is dangerous my friends,” said Clinton during her speech.

Clinton spoke to the crowd about education, jobs and the importance of unions. She was introduced by one of the apprentices of the Nelson-Mulligan Carpenters’ Training Center.

“I believe, strongly, that I’m the only one in the campaign on either side who has a plan to create good paying jobs and raise incomes, so people can get ahead and stay ahead,” Clinton said. “That is my goal.”

Students also made their presence known at the event in support of the democratic candidate. This presidential election will be the first that Wil and Sara Thuston can vote in. They were not quite 18 for the election four years ago. For Sara, having something in common with Clinton besides political viewpoints goes a long way.

“It’s awesome because I’m a woman, she’s a woman,” Sara Thuston, Hillary Supporter, said. “I think that’s something that makes it really special.”

He twin brother, Wil, also feels Clinton is right for the job.

“To me it doesn’t matter that she’s a woman,” Wil, Hillary Clinton supporter, said. “She just has more experience than any of the other candidates, and that’s what I trust in.”

Lindenwood University student Carlos Morantes attended the event in support of Clinton even though he is an international student and cannot vote in the United States.

“I’m just here to support her even though I can’t vote,” Morantes said. “Later down the road she is the one that is most suited to be the president of the United States.”