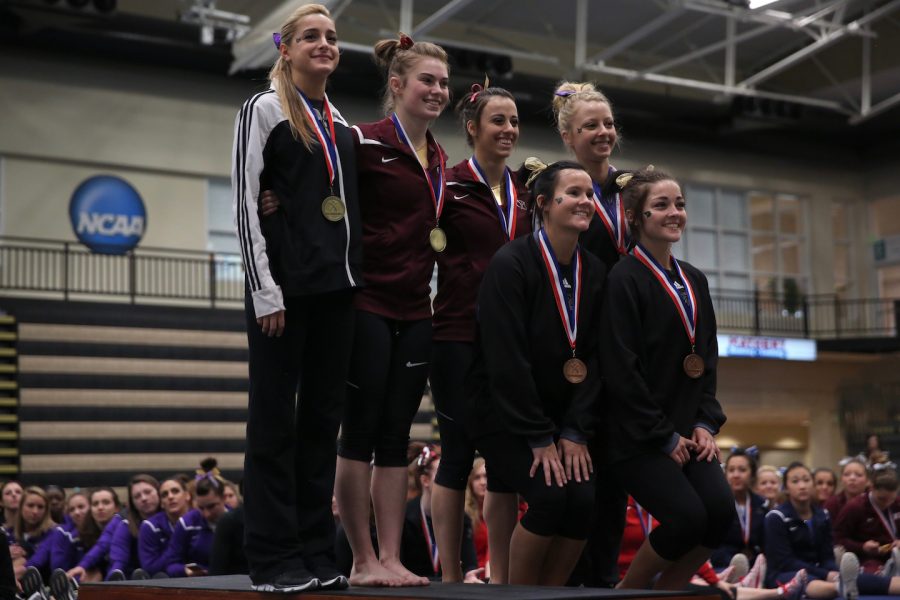 Lindenwood's Rachel Zabawa and Kayla McMullen pose at the bottom of the podium after placing in the individuals finals.
Photo by Carly Fristoe

Sunday afternoon capped off the final weekend of the 2016 season for the Lindenwood gymnastics team.

Six individuals represented the Lions in the event finals, and two placed in the top five in their respective skills.

“I think event finals is kind of the fun day of it all,” said head coach Jen Kesler. “It’s really laid back, and everyone is supporting everyone, no matter who the team is.”

The Lions had at least two individuals on vault, beam and floor.

“It’s the least stressful day because it’s just all about showing off your gymnastics and getting to celebrate the fact that you’re a first-team All-American,” said Kesler.

The previous evening, Lindenwood claimed the national title for the second year in a row, pushing past rival Bridgeport by just .075 points.

“Today was a lot of emotions,” said Zabawa. “Mainly very excited that I got to do all three of my events, so it was like a full-blown meet for me.”

She said winning the championship the night before did not have an effect on her mindset going into Sunday.

“I just wanted to stay on my feet in every event, and I got to do that, so I’m happy with how I did,” she said.

But Zabawa did more than just stick her landings.

The senior ended her career with two medals, finishing fifth overall on vault with a score of 9.800 and tying forthird with McMullan on the floor exercise with a 9.875.

After breaking the program floor record in team qualifying on Friday, Alexander fell short on Sunday, hitting a 9.250 on her routine.

“I liked today,” Kesler said after the final results. “I know a lot of them are really sore, but I thought they did a great job, especially the seniors for it being their last routines… I’m very proud of them.”

Following the individual awards, Kesler was named the 2016 Coach of the Year and was honored for her efforts as interim commissioner of the MIC and host of the USAG Nationals.

Layout and design by Phil Brahm