Spring drag show aims to prove ‘Closets are for Clothes’ 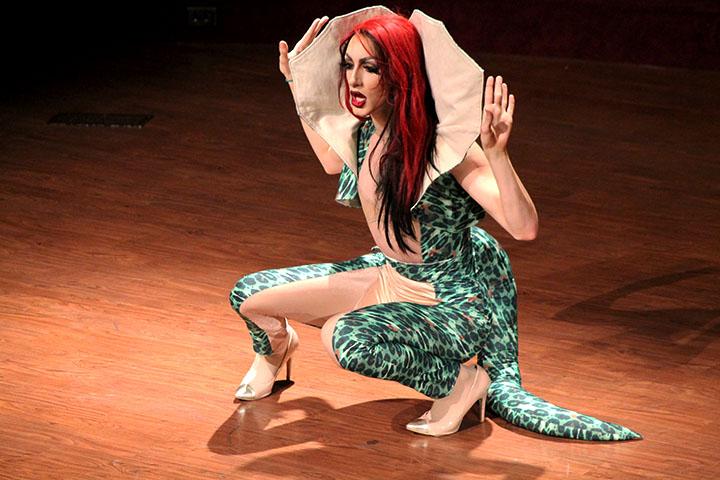 A portion of the show featured a performance by Duchess, dressed as a lizard.

Drag, not to be confused with transvestism, typically defines a man impersonating a woman or vice versa- known as a “drag king”- for the purpose of performance art.

The theme for this semester’s show, GSA’s third, is “Closets are for Clothes.” Participants, mostly LU students along with at least one or two professionals, will express through various performances the idea that people are who they want to be and clothes are only something people wear.

Nick Simmons, president of GSA, said that show director Ethan Miller came up with the idea of hosting a drag show in spring 2015 and has directed the past two shows as well.

“This show will feature a few new performers, who I’m sure will leave the crowd wanting more,” said Simmons. “It looks like it will be bigger and better than ever… With a professional DJ coming and all the fabulous drag queens and kings we’ve grown to love coming back, this will be a show to remember.”

Simmons said that the show is about breaking stereotypes and showing pride of how far GSA has come in their community, while recognizing that society still has a long way to go.

“The drag show helps us raise awareness in a way that is very entertaining,” said Simmons. “It puts GSA in the spotlight and, by doing that, we are able to shine light on all the other issues we face.”

In previous years, whoever wanted to participate was welcome. This show was the first in which the organizers held actual auditions. However, Simmons said they have never turned anyone down.

“We use the auditions as a way for us to advise performers and help them overcome any fear they have,” he said.

The first show featured many students performing their own numbers, including junior May Lantos as a drag king leading the segment “Mr. Jay and his Bitches,” in which she performed Sir Mix-A-Lot’s “Baby Got Back,” with Zac Farmer, Tyler Hoeferlin and Logan la Rue with dramatically altered buttocks, inciting great enthusiasm from the audience.

“Something I really admire about this was that we were able to see what it is like, a drag king or queen,” Lantos said. “It truly is an art form that I personally admire, so being able to be a part of that was super cool.”

The drag show is free to the public and audience members are encouraged to make donations. All proceeds will go to Pride St. Charles.