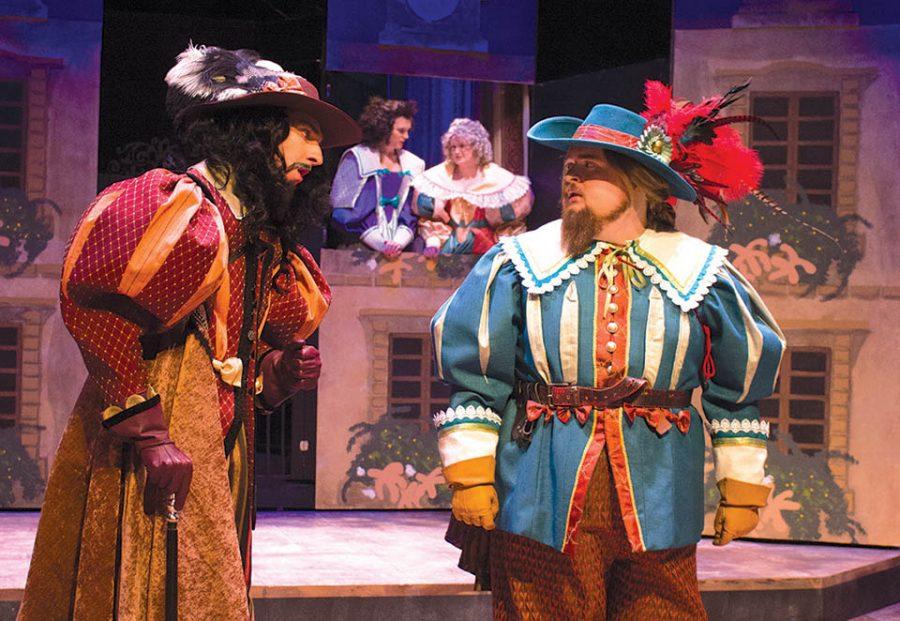 Photo by Ana Castillo Hunter Fredrick, left, on stage with lead, Fisher, in a dress rehearsal of “The Liar.”

The Emerson Black Box Theater will become a venue for 17th century French theatre when the farcical play “The Liar” opens this week.
American playwright David Ives translated and adapted the “The Liar” from Pierre Corneille’s French-language play “Le Menteur.”

“It’s very funny,” said director Donna Northcott. “It’s very fast paced, silly with a lot of little surprising contemporary jokes that sneak up on you when you aren’t looking.”

Set in Paris, 1643, “The Liar” tells the story of Dorante (John Fisher), a young man who is incapable of telling the truth. He meets
Cliton (Jason Flannery), who, in contrast, cannot tell a single lie. The story revolves around the endless mix-ups caused by Cliton’s honesty and Dorante’s dishonesty, especially with the opposite sex.

“Dorante is very confused about what he wants,” Northcott said. “I think he likes the idea of being in love. He likes the chase. He likes the act of wooing and winning a young lady, the whole challenge.”

Fisher said that Dorante is the first character he has played that has so many levels to it.

“The character is a chameleon that the moment someone comes in the room, he immediately changes who he is,” he said.

Even though the show is a comedy, it also carries a message that is conveyed through the romance between Dorante and Lucrece (Megan Wiegert), according to Fisher.

“[Dorante] initially thinks he falls in love with her for her looks, but really he’s falling in love with her words,” he said. “I think my character is there to remind people that your words are you. They embody you.”

Northcott said that, besides being entertained, the audience should expect to be “wowed by fabulous design elements.”

“The set, the costumes, the lighting, the sound, the props; everything is just really rich and luxurious and colorful,” Northcott said.

The set used is called periaktoi: three-sided columns that create a background. Each of the three sides is painted with a different setting and by turning them, it allows for quick location changes.Also, the “fourth wall” between the stage and audience is broken with two box seats on each side of the stage that seat four audience members.

“There’s a lot of moments in this where the actors are speaking directly to the audience,” Northcott said.

Additionally, the costumes create what Northcott calls “a visual treat” that provides an authentic sense of 17th century theatre. With capes, swords, and long curly wigs on the men and luxurious gowns on the women, Northcott said the costumes are very bold and colorful with a variety of patterns.