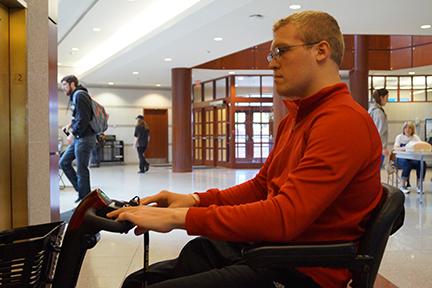 Andrew Honerkamp waits for the elevator on the second floor of the Spellmann Center.
Photo by Phil Brahm

Lindenwood freshman Andrew Honerkamp leaves his room in Matthews Hall each morning and heads to Spellmann Center. Every bump or crack in the sidewalk is an issue, and every hill a challenge.

Once inside, he presses the elevator button for the third floor but often must rely on the kindness of others to get into the classroom and to his desk.

Honerkamp requires a greater effort than the average student because he has a disability; he uses a motorized scooter or a walker to get around.

An investigation by the Legacy found that almost all of the 13 buildings on the historic side of campus either have restricted or no access for more than a dozen students like Honerkamp.

Honerkamp’s inability to climb stairs means all of his classes are in Spellmann Center, the only academic building on campus to have full access to each level.

“Basically all my classes are in Spellmann because it’s easy for me to get around, and my work and learn job is in the radio station, [on the bottom floor],” he said.

Honerkamp, and other students with disabilities interviewed by the Legacy, can’t maneuver many of the buildings because they were constructed before the Americans with Disabilities Act became law in 1990, therefore exempting them from current building code regulations.

For example, one of the main academic buildings on campus, Roemer Hall, built in 1921, has access to the main floor, but no access to the top two floors, where most of the classrooms are located.

In addition, all seven of the dorms on the historic side of campus have steps leading up to the entrances.

Cobbs and Parker Halls have wheelchair ramps attached to the building, but they lead to doors that only offer exit points. Irwin Hall has a side entrance with an ID accessible door, but it has a small, concrete ledge that could prohibit individuals with disabilities.

Dorms such as Sibley, McCluer and Niccolls have no wheelchair access.

Jeremy Keye, the university’s student support and accessibility coordinator, said because of this, disabled students mainly live on the newer side of campus, where the dorms have elevators and doors with push button switches.

A building code manager with the city of St. Charles said that nothing legally can be done about older buildings being inaccessible, but if any of them were to undergo a major structural renovation, the school would have to try to bring the building up to ADA standards.

Though officials in the city and at the university claim that nothing needs to be done to these buildings, Kimberly Lackey, the public policy team manager at Paraquad, a St. Louis-based organization dedicated to assisting individuals with disabilities, said that the age of a building does not exclude an effort from being made.

“Even if a private property has been deemed historic, it doesn’t excuse any place from making practical changes,” Lackey said.

She said that Title III of the Americans with Disabilities Act states that properties are required to do whatever is readily achievable to ensure that people with disabilities are given equal accessibility.

Lackey said if Lindenwood, for example, constructed wheelchair ramps on every building, their integrity would not be disturbed, and access to at least the main floor of every building could be achieved.

Keye said that about 4 percent of the 400 students seeking accommodations have physical disabilities. He added that those student are aware of what Lindenwood has to offer before they begin classes. Every effort is made to accommodate them, he said.

Honerkamp, a communications major, said that each semester he has had Gen-Ed classes scheduled in Roemer Hall, but because the building lacks access, he had to email the university to get the locations of the class changed.

Despite this accommodation, Lackey does not believe appropriate action is being taken to provide equal access to parts of campus.

“That type of complacent attitude regarding accessibility is not helping to achieve anything,” Lackey said.

She said restricting a student in a wheelchair from visiting a friend in a dorm on the heritage side of campus because the university is unwilling to provide accessibility, is unfair.

“There are lots of places, here and all over the country, that are doing great things to provide full access to everyone,” Lackey said. “So to hear that some places still aren’t making that serious effort is definitely concerning.”