CAB finds ‘love on a leash’ with dogs visiting campus 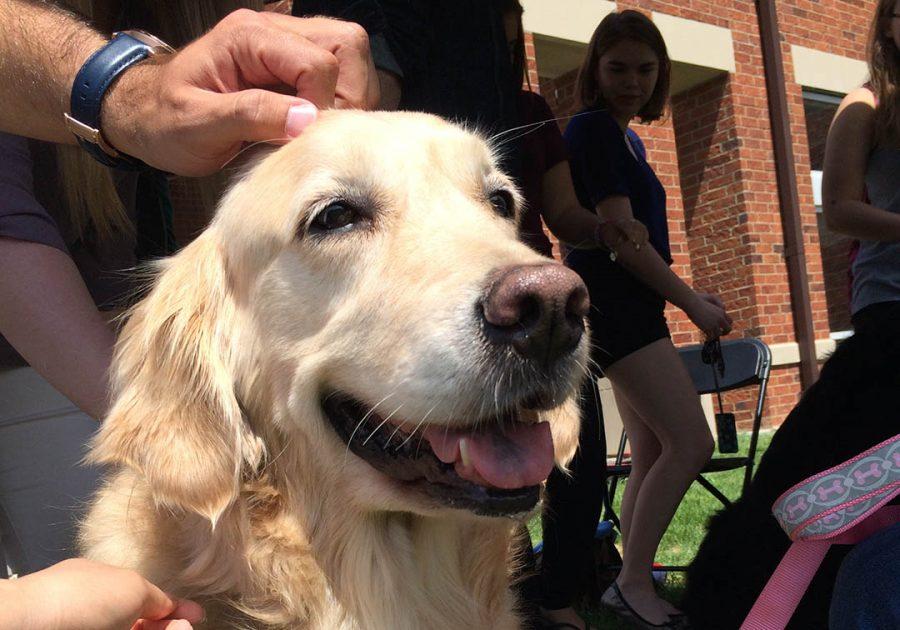 Lindenwood students took a break from studying this week to spend time with the Campus Activities Board and a group of visiting dogs.

“Dogs are really great animals for students who are stressed, and with finals coming up, we thought it would really be a good way for students to unwind and be happy with animals,” said Morgan Riggs, spirit chair of CAB. “We contacted Love on a Leash to come out and bring their dogs, have them for the students to pet and kind of just relax.”

Volunteers from the St. Louis chapter of Love on a Leash organization brought their dogs to campus from 11 a.m.-2 p.m. on Tuesday, April 19 for CAB’s Anti Animal Cruelty Pledge. Love on a Leash is a national organization whose mission is to brighten peoples’ days by visiting them with their dogs at places such as hospitals and nursing homes.

In addition to this activity, students participating signed a volunteer pledge against animal cruelty.

Jan Vance of Love on a Leash was happy to be visiting Lindenwood with her 140-pound Newfoundland named Truman.

“It’s very nice,” she said. “It’s been a nice crowd. Everybody has been very friendly and receptive to the idea.”

The students also loved the event.

“I think we should be allowed to have pets,” she added. “Maybe not in the dorm, because that wouldn’t be fair to the animals, but in a house I don’t see an issue with it.”

“I think the goal was accomplished and, by far, exceeded,” CAB’s Ashleigh Calloway said.

Calloway added that there will be another opportunity to pet dogs in the Gazebo on the heritage side of campus during the afternoons of May 9-10 during finals week.