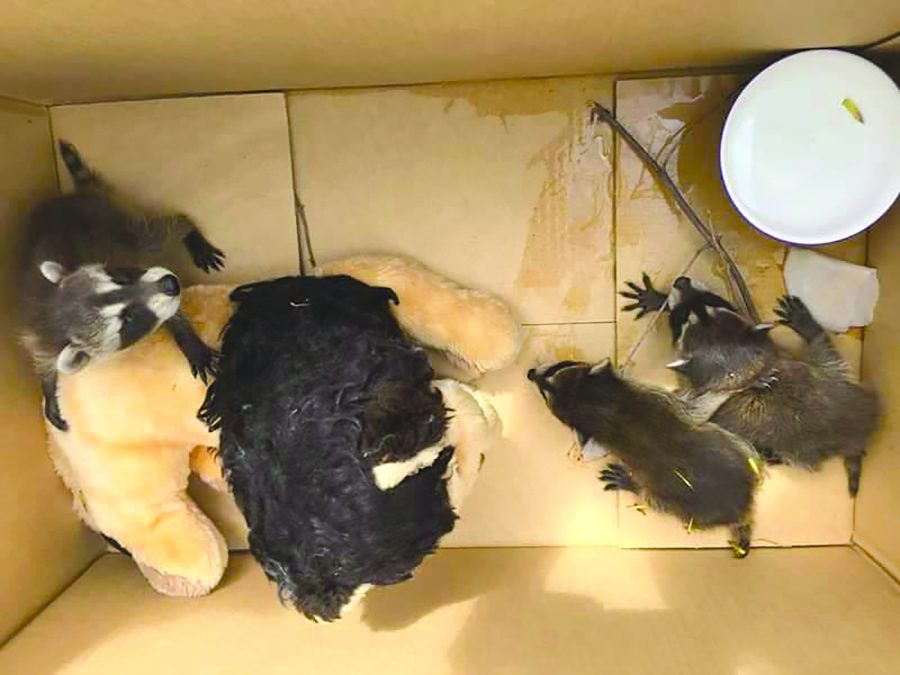 Three raccoon cubs found orphaned near women’s housing last week are resting comfortably in a shelter, thanks to the efforts of some students and a university maintenance worker.

“I have been working here for three years, but this was the first time I had to deal with raccoon babies,” said Mark Rudis, a maintenance employee.

Lindenwood senior Courtney Heise found them together with her roommate Katie Kuehl and Rudis.

“We called him because our AC wasn’t working, and when he came to repair it, he called us to show us a baby raccoon that was walking around by himself,” Heise said.

She told Rudis that she had seen a bigger raccoon get struck by a car one week ago, right in front of their house.

“We all assumed it was the mother,” Heise said, “So Mark [Rudis] looked for more babies and found two more in a hole in the tree behind our house.”

Rudis called several animal shelters to ask them to come and pick them up, but none were willing to help.

“They said they weren’t in charge of raccoons, or that they were sure the mom would come back,” Rudis said. “They all like to put these cute pictures on their websites to make us donate, but when it comes down to help, they don’t.”

Heise finally found a shelter that was willing to take the raccoons, or at least that is what she thought.

“When I arrived after a 45-minute drive, they told me they wouldn’t take them because they were too healthy,” Heise said. “They were only taking care of abandoned or injured animals.”

Heise tried to explain to them that the mother was very likely dead.

“They just told me to put them back in the tree again and wait until the next day,” Heise said. “So I gave them some water, put them in an open box with one of my stuffed animals and tried to feed them.”

Rudis bought some formula and cat food for them, but they wouldn’t eat or drink.

“After we put some formula on the stuffed animal, they would lick it off,” Rudis said.

Heise added: “They probably thought it was their mother. When I took one of them, the smallest – I called her Roxy – she hugged my wrist really tight and wouldn’t let go. Only when I gave her the stuffed animal she would let go and hug the animal instead.”

Heise checked on them a couple of times during the night.

“I was really worried,” she said.

The raccoons were still there the next morning, just as they all had assumed. Rudis took action and made a post on Facebook to try to find help.

“Luckily a friend of mine, who lives in Texas, gave me the number of a shelter who she said could help me,” Rudis said.

A couple hours later, a member of the Bi-state Wildlife Hotline came to pick up the three raccoons.

“It was hard to let them go, but I am glad they have been helped now,” Heise said.

Two days after the three of them were found, another raccoon baby was found on campus. It isn’t clear if it is their sibling, but it has been helped already.

“We were lucky enough to be born as humans, so I think it isn’t too much to ask that we take care of those who need special protection, the animals,” Rudis said.