“Who am I kidding?” – original mini-musical about finding yourself 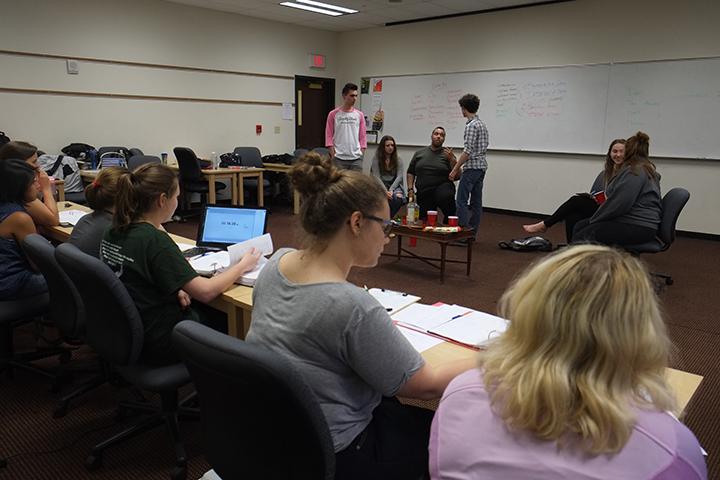 The night of student-directed shows continues with an annual cabaret, but this year it is more of “a mashup of songs with a storyline,” director Taylor Palmer said.

This contemporary mini-musical, called “Who am I kidding?” focuses on eight college students, trying to find out who they are as individuals.

“It’s all about accepting yourself and not being afraid to show your true colors,” Palmer said.

Palmer knew from the beginning that instead of a usual cabaret, which is typically performing songs without a story-line, she wanted to create a full story.

Palmer started the creation process with ideas of the songs she would like to use and then developing a storyline around it.
The songs are mostly from contemporary musicals.

“There is even a Disney song thrown in there at one point,” Palmer said.

After the outline was done, Palmer asked graduate student Jason Flannery to help writing the dialogue.

“I tried to keep it light and make the dialogue as genuine and non-serious to reflect how people are in college,” Flannery said.

For Flannery, the biggest message this mini-musical sends is that it is OK to not have all the answers about future.

“It’s all more just about the attitude that you approach everything with,” Flannery said.

Palmer said she wants the audience to leave the theatre thinking that it is OK to accept and embrace who you are and not to “be afraid of what society says or what other people around you say. Don’t be afraid of the judgment, just be yourself.”

For junior Erin Olson, who performs as Joey, the biggest message is to be true to yourself.

“It’s really easy to come to college and just get sucked into it and lose yourself for a little while before you actually come back to that,” Olson said.

This is a second time Olson has acted in a cabaret, she said she has enjoyed working with an original character that no one has ever done before.

“It’s been really cool because we get to create our entire character based off of what we want it to be,” Olson said.

Palmer said that making this show happen has been “100 percent collaboration.”

“It’s an amazing thing to get all of our creative minds working on one project,” Palmer said.

Ultimately, Palmer’s hope is that the audience will have fun watching the show, and she said people should expect to see a “quirky, yet heartfelt mini-musical about finding yourself.”

“I just want people to sit back, and relax, and just have a fun night of some cheesy, romantic, fun theatre,” Palmer said.