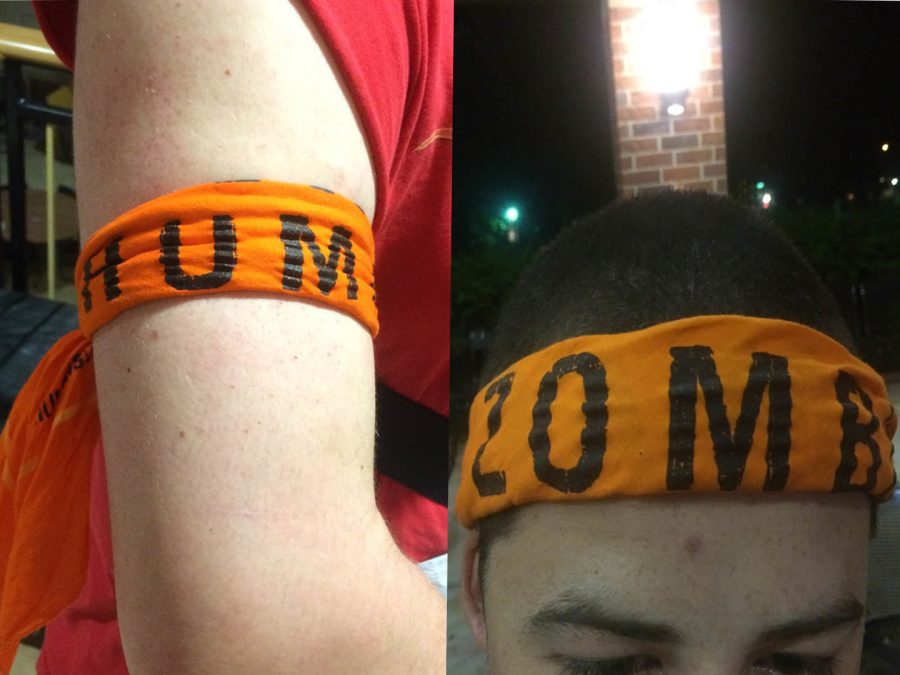 A slightly fictionalized account of Lindenwood’s spring 2016 game of Humans vs. Zombies. The events that took place, from April 18-22, are told from two opposing viewpoints: one from a human and one from a zombie.

Prologue
The following are two testimonies from reporters Stephen Hawkes and Lontreal Farmer. The duo were been assigned to cover ARC 111’s journey to Mars. All of that changed when word of the Replicants leaked out. The Replicants were corrupted humans: diseased, maddened to violence and driven by a Darwinian conviction of their superiority. They were an infection that sought to turn every human into one of them. Some people called them “zombies.” To protect ourselves, the remaining human survivors loaded out with the only weapons using a certain technology known under the acronym N.E.R.F., along with “sock” grenades, used to temporarily stun Replicants. This is the story of two colleagues, due to unforeseen circumstances, forced to fight on opposite sides of a war between man and the inhuman.

Day 1
Tensions were high when the news first leaked. It was rumored that some among us had the infection. We dubbed these patients “original zombies” or OZ’s, eventually discovering they were half-Replicant, half-human. They looked like us, but would attack and turn others into one of their own. That night, I was given an important role alongside fellow survivor Jonathan Davies. We were given “sock” grenade launchers and told to take out a raging monster. We were supposed to have guards, but we found ourselves alone. The Replicants turned Davies, and then they got Lontreal. How did I make it out alive?

Day 2
We have to escort three technicians and arm bombs. We split into two groups: the assault squad ran with the young intern and the main group took the other two. I ran with assault squad. We had zombies at our heals the whole night. Lontreal was one of them, but it wasn’t Lontreal anymore. The assault squad didn’t complete the objective, but we kept the main zombie force on us all night and we never lost a person. Two died from the main group. I almost died.

Day 3
I stayed safe today. I had other duties to attend to. However, we lost a lot of humans today, including three of our sword wielders. They will make me a sword wielder tomorrow. It is time I became more than a journalist.

Day 4
The Replicants have captured our leader, Captain Pritchard. We find him and escort him back and join the group. We are fighting hard against the Replicant force now and losing numbers fast. We help as much as we can, but many are still turned. The zombies reclaim the director, and it looks as if I am one of only two survivors. We run. I hear Lontreal screaming, “Don’t take this away from me Stephen!” as he runs after me. Kyle turns and shoots him, we outrun several others and take a few more down. We make it back to safety to find there are still other humans alive.

Day 5
There are only six of us alive and able to fight in the mission. Everything has worked today, maybe our final assault will too. We intend to cut off the supply line. The whole horde is there to stop us. Things were going well. I sliced my way through as my comrades covered by back. My sword is undefeatable. I intended to destroy the entire horde with it, but I charged too far ahead. The Replicant that used to be a woman named Kayla Wood flanked me. My fatal flaw all along caught up to me, and I was the first one to be replicated. As the virus coursed through me, I watched the remainder of my comrades die. I’m only a journalist. I should have never tried to play soldier. I died a slow death as I watched my comrades beat down, but as there was only one left standing, a new thought raced through my head: I hope he doesn’t fall too quickly.
I want to be the one to replicate him.

Day 1
The paranoia of the first day has caused an understandable rift between all the others on ARC 111. All but two. The first two Replicants. They look and act like us. There is no way to tell who is who. I have moved through the day solo. Interacting with the other humans as little as possible. I worry that Stephen has betrayed me. But I know this is just the paranoia of the first day. I have made it to the mission briefing. Stephen is here. I can see my relief reflected in his own eyes. I am barely paying attention to what the mission is. My plan is to go out Replicant hunting. I can see that they have armed Stephen with some sort of hand cannon. Jonathan Davies has returned for this game and has a cannon as well. I try to pay attention, but I cannot shake the feeling of dread that is seeping into me. Something bad is going to happen. We start running towards the quad, and I break off with Jared Wood he also likes to run solo during the missions. We spot the large group of Humans fighting the Replicants. Stephen is in there fighting. I should go help him. It goes against everything I believe but I start running toward the group. I shoot one Replicant and run circles around the others. I run into the group of Humans, and I feel safe. I stop watching my back. That is when he gets me.

Day 2
I fell during the night mission. I am a Replicant now. I am hunting. Looking for the one whose name still surfaces through the hive mind of the Replicant army. Stephen. I go the shop and buy an upgrade. I am now a Needler Zombie. If I hit someone with my orb, they must raise a hand and keep it there until they talk to a Moderator or enter a building. The night mission looks a bit scarce. Johnathan Davies, who was also turned last night, is joining me. We rally what little Replicants we have. The humans have to escort targets to certain locations in order to complete their mission. We gather together and try to form a plan of action. I take the job as the scout and, when the mission starts, take off into the darkness. I spot a large human group crossing the bridge between Guffey and Matthews. They have one of the targets. We need to kill those targets. I begin to stalk them silently through the cars. They catch sight of me. I being to run out in the open, no one attempts to run me down. They understand the risks. There he is! Stephen is with this group. I will not leave them, I need to turn him. My brother. I chase this group all the way behind the lake, and finally to the basketball hoops behind Evans. I get one of the newer Humans to chase me. I am running backwards and I am about to throw the ball when I make contact with something hard and metal. A van has hit me. I even managed to dent it. The humans successfully complete their mission while I recover.

Day 3
The sun brings a new day, and another chance to find him. To turn him. The mission today is keep away. We must keep the Humans supplies away from them, while trying to get our supplies to the hoops behind Evans at 5 p.m. I am bogged down most of the day, but I arrive in time for the last part of the mission. I see the one who turned me: Tyus Leslie. He is upgraded as well. They will need grenades to stop him. We wait until 5:56 p.m. There are many Humans around the area planning to stop us. We make the run at 5:59, but the Humans are successful in keeping the area clear. However, we were also successful in keeping their supplies from them.

Day 4
Stephen was not at the night mission, but I know he is around today. I will turn him. This mission is going more our way. The Humans have captured our leader, and we have to capture theirs. I run out into the night with the strike team again. We find what is left of the human strike team after yesterday. I feel the need to chase. I want to be with my brother again. But the horde comes first. We abandon the chase and veer off behind Evans. We capture the Captain Pritchard and take him back for Replication. We get word that the Human group has our leader. We arrive to find they have cornered themselves. We begin swarming in. We wipe out the human group. There are only two survivors from the large group. I see Stephen on the hill. I begin running after him. I can hear yelling. I cannot tell what is being said but the intensity of it frightens me. As I get closer I realize that it is coming from me. I am screaming loudly. I shout, “Do not take this away from me, Stephen!” I am so close until I am shot.

Day 5
The day is quiet. The Humans stay safe. Their time is close to an end. There are seven humans left. This mission is the last. Do or die. The humans arrive in the quad, I can see him. The battle begins. I managed to catch the whole charade on camera.