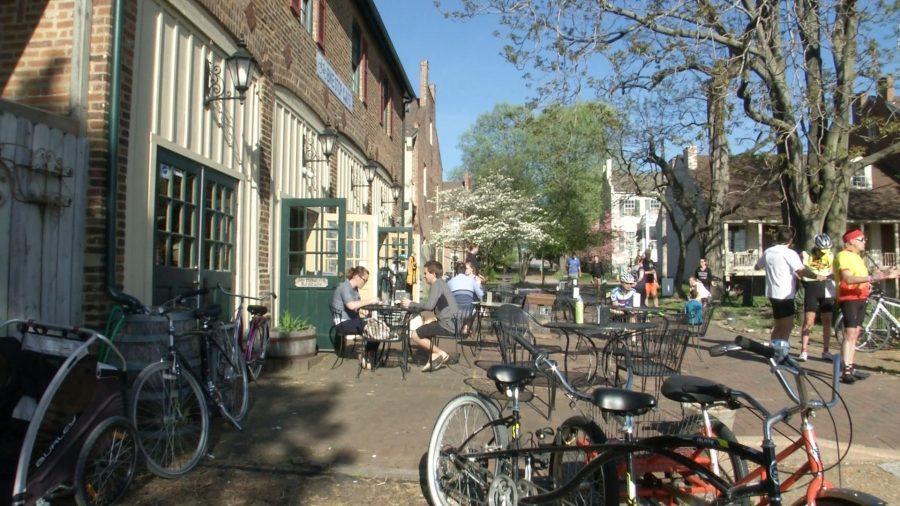 Positioned near the Katy Trail is the Bike Stop Café and outpost, which serves not just cyclists, but those just looking for some good food as well.

The Café opened in 2010 on 2nd in St. Charles, but later moved to its current location on Riverside Drive three years ago. It is owned by Jodi and Tony Devonshire, who aim to make the place feel like home for its customers.

“Biking is universal. Eating is universal,” said Jodi Devonshire. “And it sort of draws people to us because it feels comfortable to them. It feels like something they know and are familiar with.”

Jodi and Tony opened the shop in order to combine their two passions.

“I enjoy cooking healthy foods. [Tony] works on bikes,” Jodi said. “We both have bike passion, so it really just seem to fit nicely. It really was something that was missing from the area.”

Bikers, runners and walkers stop by the café before or after their ride to grab lunch, a coffee or to even get their bike fixed at their shop. For some customers it is not the draw to biking that brings them in. Bobby Jones, a customer, likes to stop by for a bite to eat, rather than a bike to ride.

“I come here for the food, and the coffee, and it’s a real nice laid back atmosphere,” Jones said. “I bring my daughters here for breakfast on Saturday mornings and all the people who might be inside or outside are very nice to them.”

For those who do stop by the café with biking in mind, they have the opportunity to bike straight off the Katy Trail and into the Bike Stop Café. Jennifer Macalady said she enjoys the healthy food and good service.

“It’s an excellent place to have lunch,” Macalady said. “Sometimes I’ve just come down here to walk around St. Charles and I’ve stopped at the Bike Stop Café.

There are even people from all over the world that stop by the café after a ride on the Katy Trail. According to Jodi Devonshire she has had customers from places as far away as Germany and Australia. Some come from a bit closer to home as well.

Jodi Devonshire said, “A lot of people are from even just further out in the US like Oregon or Colorado where you would expect to find a place like this and they say, ‘gosh, this really just feels like home to me.”