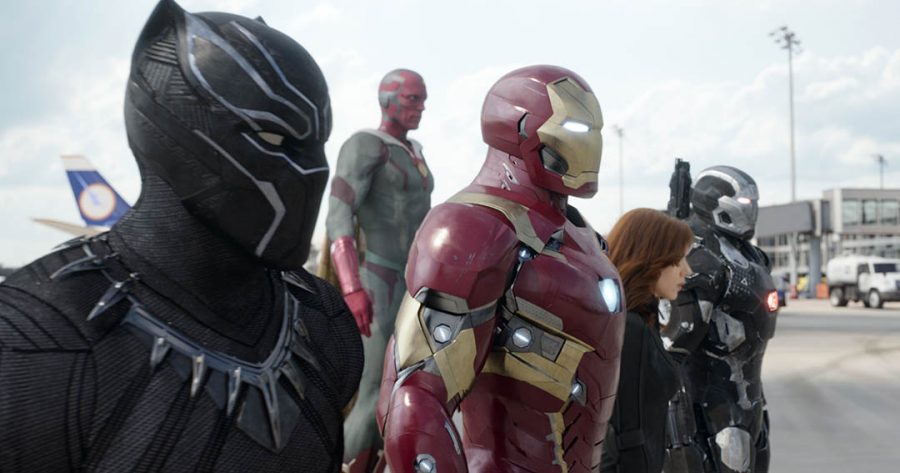 In the midst of “Batman v. Superman’s” failure, critically speaking, “Captain America: Civil War”, from directors Anthony and Joe Russo returning to the “Cap” story line, is a reminder that there is still creativity left to be discovered in the superhero genre. Sure, the genre is filled with the whole “good versus evil” story over and over again, but what Marvel excels at is telling this story in new and creative ways every time.

Taking place after 2015’s “Age of Ultron,” the Avengers are noticing a rapid increase in the amount of catastrophic events happening around them, leading to the deaths of many innocents. This brings the Avengers’ two main leaders, Iron Man (Robert Downey, Jr.) and Captain America (Chris Evans), to two differing conclusions on how they should handle things, forcing the rest of the heroes to choose sides.

Marvel has finally achieved the seemingly-impossible task of bring their films’ continuality to the level of their comics’ continuality. What I mean by that is that when you read Marvel comics, you can jump right in the middle of a storyline and still be okay fallowing what is going on. Now, with “Civil War,” I truly believe that anyone who hasn’t seen the previous Marvel movies can still enjoy the new film’s story.

At this point, most of what has happened in the previous movies, doesn’t really affect what is going on in the newer ones, besides the whole “Infinity War” build up they have been planning, but a quick Google search can help you understand that. The main reason to go back to the previous movies would be to get some backstory on characters that you’re interested in, or re-watch a beloved story.

As for the actually story, it is executed quite well. I actually found myself liking the film more than its source material. There’s a mystery that develops behind the scenes of the story, giving the film an almost 1990s murder mystery feel to it.

As for the cast and characters, it is full of great performances. Evans and Downey take a much more serious role than what they have done in previous Marvel films, but it is still executed well. Even the newcomers to the franchise, such as Tom Holland (playing Spider-Man) and Paul Rudd (reprising his role as Ant-Man), are still able to hold up on their own.

The aesthetics are also pleasing. It features an epic superhero score that everyone comes to expect, and the visuals and action are the top of the industry.

“Civil War” is a film for anyone that has enjoyed previous Marvel movies, or for anyone that wants to see a well-made action blockbuster. Even though the superhero genre can feel like the most exhausting genre with how there are some many similar films, I am still glad to live in a time where a film like this exists.