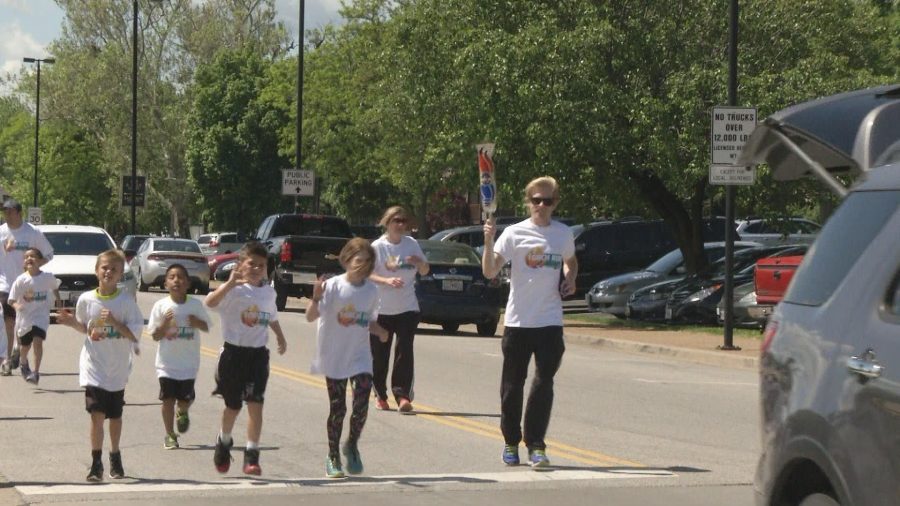 Parents and their children gathered around Frontier Park on May 4 to celebrate the 31st annual Shelter Insurance Torch Run.

The torch run in St. Charles works to raise awareness for the Special Olympics with a mission of generating exposure and enthusiasm for the Show-Me State Games throughout Missouri.

The run originated in 1986 as a 30-mile trail, operates in over 40 different locations, and now has over 200 agencies working it each year.

Chris Ricks, who represents Shelter Insurance, the event’s primary sponsor, discusses the relationship that Shelter and the torch run have had over the years.

“Shelter has a long standing sponsorship with the Show-Me State Games, and Shelter is synonymous with Missouri. This (Missouri) is our home state, and the Show-Me Games are synonymous with Missouri,” Ricks said. “Our partnership is kind of a natural fit and it helps us promote family fun and fitness, and also give back to the customers and the people in the communities that we live and work in.”

Anna Hargis, who was one of the primary coordinators of the 2016 torch run, is pleased with the long-term relationship the Show-Me State Games have built with Shelter.

“Shelter Insurance has been a long time sponsor for the Show-Me State Games, and it was our pleasure to help bring this back as part of our sponsorship. We thought it was a great way to say thank you to Missouri,” Hargis said.

The event begins by lighting a six-foot tall torch, and the St. Charles Patriots follow suit by firing off a cannon to indicate the beginning of the event, and finished with a parade of police vehicles, followed by the kids participating going down South Main Street before making a loop around back to Frontier Park.

The Shelter Insurance Torch Run will go to Jefferson City, Missouri on July 22 for it’s next event.