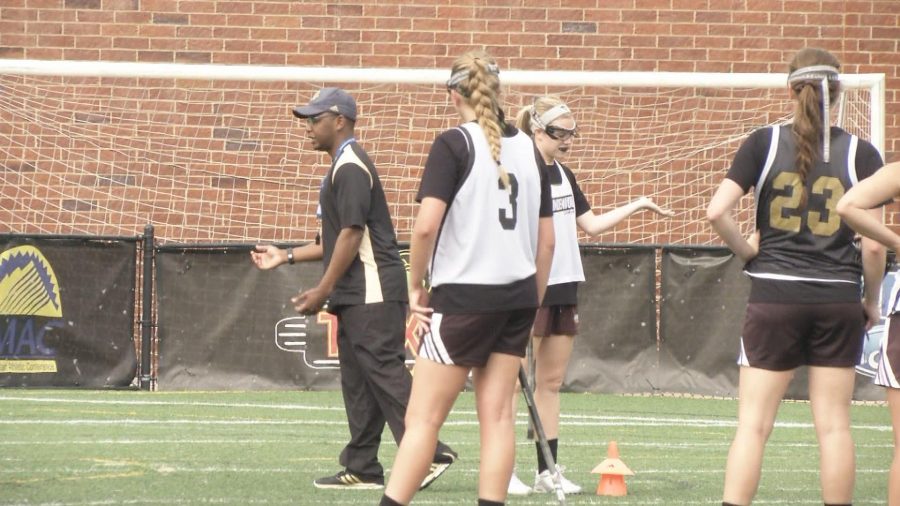 Coach Brian Smith works with his team before the semifinals game.

Four teams compete in the RMAC semifinals and championship games: Lindenwood, Fort Lewis, Colorado Mesa University and Regis University, with the Lions gaining the No. 1 seed after finishing one of their greatest seasons in program history.

Assistant Coach Brian Smith condones his seniors for being a prime reason of the team’s success and for leading by example for the underclassmen.

“You know we’ve got a couple (seniors) in there as captains, Maddi Osello and Jordyn Constance, so they’re leadership in the captain role for our team is very important and we rely very heavily on that,” Smith said. “The rest of the senior class has done a tremendous job as well with whatever their role is, whether it’s starter, contributor or someone who comes in off the sideline.”

Three of Lindenwood’s starters, including captain Jordyn Constance, goalie Rachel Ortell and defender Erin Abbot were named as individual players of the year.

Constance wasn’t fully satisfied though with the title, as she understands the team still has work to do.

“It’s up there as one of my highest achievements, but there’s still one that I’m still waiting for,” Constance said. “We want to get that national title more than anything, that tops everything.”

From an academic standpoint, junior Morgan Judd received the 2016 RMAC summit for highest grade point average of all participants in the RMAC finals, and thinks of both her coaches and parents as role models both on and off the field.

“I set a high bar for myself as well as for my sisters, but they’ve been the biggest motivators for me both with lacrosse and in the classroom,” Judd said. “They’re always pushing me to get better.”

After finishing the regular season with a 14-2 record, the Lions defeated the Fort Lewis Skyhawks 16-8 in the RMAC semifinals game Friday.

They will face Regis on Saturday, May 7 at 1 p.m. and are looking to earn a spot in the conference regionals.