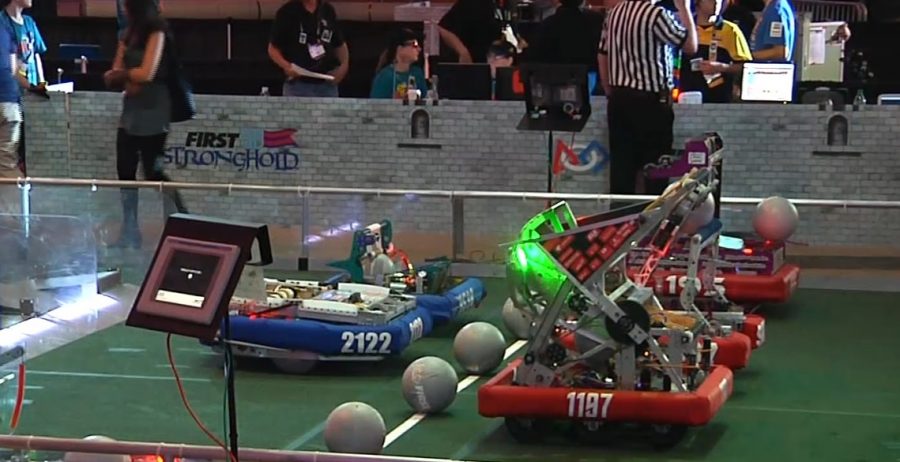 Robots compete in the game "Stronghold".

St. Louis hosted the world’s largest robotics competition April 27-30. Downtown was packed with Jr. High and High school students from around the globe for the annual FIRST Robotics Competition.

For the competition, high schoolers had to build and program a robot with offensive and defensive skills to perform in a yearly game. The game is announced in January through a release video. The game changes every year.

On top of the design, students must design a team brand and raise funds for competition. All of this must be accomplished within six weeks. If faced with this challenge, many people wouldn’t even know where to start…. but thousands of teens around the world call this “the hardest fun you’ll ever have.”

This year’s game is called “Stronghold.” In the game, competitors have defenses and start in the middle of the arena. The objective is to cross the opposing teams defenses and take each other’s “towers” by throwing “boulders” into them. The towers are the equivalent of hoops, and the boulders are balls.

Over 20 thousand students from around the globe participated in the four day  event. A champion alliance was announced Saturday night in front of 40 thousand spectators in the Edward Jones Dome.

FRIST robotics competitions have inspired many students to strive for greatness well beyond their high school years.

Micheal Berio, from team 422, shared how it felt to come back to the championships as an alumni mentor.

“The last two times I’ve been here I’ve enjoyed it so much and I valued the experience so much. You leave the team as a student but you still get to have fun with robots while you’re in college.”

Next year’s game will be revealed in January, and students will put their creativity to the test all over again .