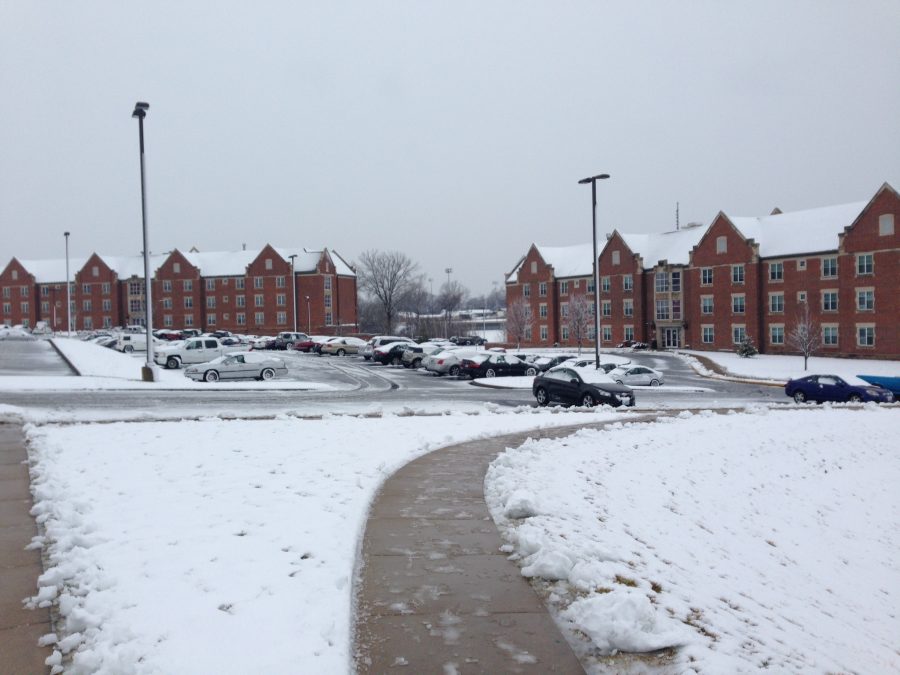 The biggest snow storm of this winter brought snow, slush, rain and high winds to the entire St. Louis area. While St. Charles was not heavily hit, Lindenwood University’s campus saw its fair share of the harsh conditions.

Several inches of snow fell in the early hours of the morning, causing poor road conditions during the morning commute.

Due to the conditions, school administrators cancelled all 8 a.m. and 9 a.m. classes.

Ground crews began working early in the morning to clear the roads and sidewalks across campus.

Grounds worker Joe Runyon said a snow removal plan was laid out earlier in the week to handle the storm. While the storm was initially predicted to be much worse, its track shifted south decreasing the total accumulations.

“The normal plan is we usually have two groups of guys come in. We’ll do four hour shifts if it’s a bad snow, Runyon said “We lucked out today.”

“We had one group of guys come in at four in the morning and then the other group of guys were either on call or came in at seven.

Several students headed out of their dorms despite the cancelled classes to see the snow. For many at Lindenwood including international student Jazmin Del Angel, snow is not a common sight.

“I am from Mexico and I am now a sophomore, so I’m kinda use to seeing the snow now,” Del Angel said.  “Even though I’ve been here for nearly two years, I still think the campus looks beautiful when it’s covered in snow. ”

The weather took an interesting turn shortly after the grounds crews cleared the campus. In a matter of hours, temperatures rose nearly 20 degrees and the three inches of snow that fell melted away.

High winds from the storm brought down several limbs across campus. After clearing the snow, ground crews used chainsaw to remove the branches. The falling limbs did not cause any damage according to ground crew officials.