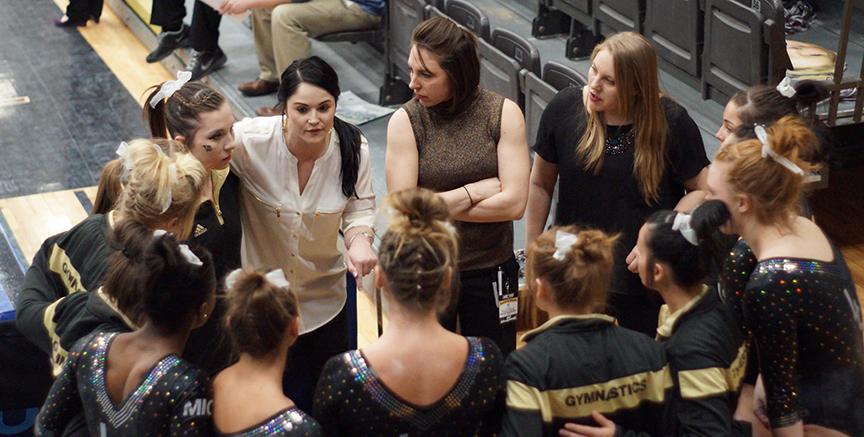 Head coach Jen Kesler speaks to her team after they completed their first rotation of the semifinals. <br> Photo by Phil Brahm

The Lindenwood gymnastics team look to defend its national championship as it stepped onto the floor of the Hyland Arena for the USA Gymnastics Women’s Collegiate National Championships.

With the majority of the stands filled with their own fans, the Lions looked to channel the momentum from a come-from-behind second place finish in the semifinals. The team looked to solidify its routines for the last run-through of the season.

Sophomore Kayla McMullan said several different factors motivated the team to give it their all.

“We were all really excited and were looking forward to this weekend, especially after last year,” McMullan said. “Having our first graduating class, a bunch of the underclassmen were like we just have to do it for the seniors.”

The Lions did not disappoint, recording their best overall score in program history in the finals. With a score of 195.875, they secured the title over Bridgeport University by .075.

The win marked the second national championship since the program was founded in 2012.

The finals also marked the last time the program’s inaugural senior class would take the floor in competition. Rachel Zabawa was one of six seniors who competed in the finals. She said winning the national championship means more than ending her career on top.

“It means a lot because we’ve worked so hard for it and we just build off of each other every single day,” Zabawa said. “It’s just a lot of emotions.”

Gymnastics head coach Jen Kesler has been a part of the coaching staff for all four years of the program’s existence. She said seeing what the team accomplished over the course of the season was just as impressive as winning a second consecutive title.

“It’s amazing to look at it big picture, that this program was only started four years ago and just to see what they’ve done with the program and the girls that they are,” Kesler said. “It’s incredible to see that in four years we’ve won two national titles and that’s because of them.”