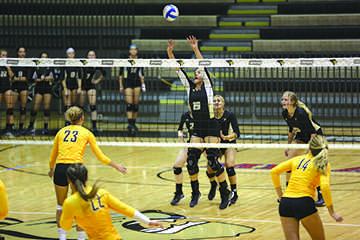 Two years ago, the Lindenwood women’s volleyball team endured one of its toughest seasons. More players were injured than in the previous six years, leaving nearly two-thirds of the starting lineup on the bench.

This required head coach Ron Young to play people who may not have been ready for prime time.

Senior player Sarah Makowski expressed that the rough past of the team should not define who they are now.

“The program has transformed from absolute rock bottom to a team to be reckoned with,” Makowski said. “For us upperclassmen, it has been a gritty, frustrating and tough journey, but it has been a beautifully challenging process that I wouldn’t trade for anything.”

Last season the Lions went 15-15 in the overall and 6-12 in MIAA conference play. Young said the record may have been a result of the rough season they had the year before. Many of the players who were forced to step up due to injuries finally started to get the hang of their positions, he said.

As for the 2016 team, Young and his assistant coaches are confident in the team’s abilities.

“After week one of the preseason, we were much further as a team than where we were last year at this time,” said Young.

The players who stepped up two years ago are now upperclassmen and are the glue of the team, he said. Makowski, Anna Reichert and Shannon Doyle are three senior players whom Young believes are the voices of the team.

“All three of them show great leadership qualities,” said Young. “They are setting the example with how to play their positions and what it means to work hard.”

[perfectpullquote align=”full” cite=”Sarah Makowski” link=”” color=”#dae13b” class=”” size=”24″] “For us upperclassmen, it has been a gritty, frustrating and tough journey, but it has been a beautifully challenging process that I wouldn’t trade for anything.”[/perfectpullquote]

According to the 2016 MIAA coaches preseason poll, Lindenwood is ranked ninth in the division. Young said that he was not surprised by this ranking; it was what he expected. Regardless, Young said he believes in his team’s effort and perseverance.

“It doesn’t matter what the score is; I’ve never had a team quit on me,” he said.

The team’s first tournament of the season will be held during the first week of September. The tournament will be hosted by Lindenwood with opponents such as Maryville University, University of Sioux Falls, Georgian Court University and University of Missouri-St. Louis.

Young said that his attitude tends to be pessimistic due to the rough past of the team. He acknowledges that other teams in the conference don’t respect Lindenwood as a team. Young also mentioned a statement that his assistant coach JP Dorn told the team.

Dorn said, “Who we were last year, that’s not who we are now. Hopefully other teams will see that.”

This season, Young said that his negative outlook is starting to change.

“In the past we have had a young team,” he said. “This year we have a more mature team with more seniors. It’s finally what we’ve been waiting for.”