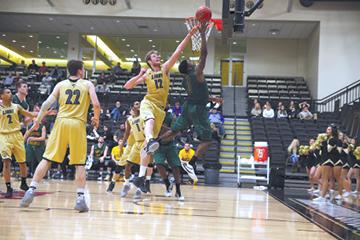 A former Lindenwood student is lacing up to play with the professionals.

Lindenwood basketball alumnus Stanislas Heili has taken the court during the preseason with the AL Saint-Priest Basketball club (ALSP). The team is located in Heili’s home country of France in the city of Lyon. ALSP is a part of the Fédération Française de Basketball (FFBB).

Heili played as a center for the Lions for the 2015-2016 season. Heili’s career at Lindenwood was short lived, yet remarkable. He set a school record for 76 shots blocked in a season and was named to the MIAA All-Defensive team.

In addition to his basketball accomplishments, he also received recognition for his academics at Lindenwood. Heili was honored on the National Association of Basketball Coaches (NABC) Honors Court for receiving at least a 3.2 cumulative GPA.

Before signing on with the ALSP, Heili took a chance with another professional sport. In late April, the former Lion participated in a tryout for the Australian Football League (AFL) in Los Angeles, California. He tried out to play the Ruckman position, which is usually for the tallest member of the team.

Standing at 7’1” gave Heili an advantage. According to the AFL website, he was the tallest player ever tested by the AFL in Australia or overseas.

In regards to his upcoming season with his new team, Heili seems to be optimistic. In a Q&A on the ALSP website, Heili was asked about his collective goal with his team. He said that it was, ” Reaching the highest possible level all together and everyone is integrated into the team that everyone finds his place.”

Heili and his teammates will take on St. Vallier in a “friendly match” on Sept. 8.