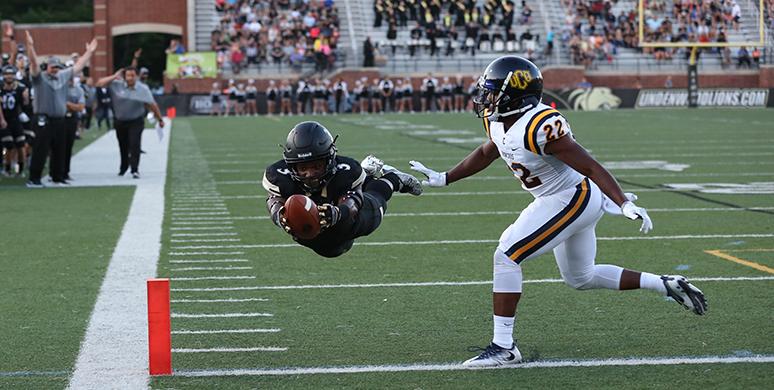 Lindenwood receiver Kendell Sparks dives horizontally into the endzone past Central Oklahoma defensive back Braden Calip for the team's first touchdown of the 2016 season. Sparks tallied 106 yards and two touchdowns in the home-opener on Sept. 1.
Photo by Carly Fristoe

Following last year’s season-ending loss, Lindenwood linebacker Connor Harris said he would give up all of his 495 career tackles if it meant getting more wins. In Thursday’s home opener, Harris got to have the best of both worlds, recording 15 tackles in a 49-26 victory over the University of Central Oklahoma.

Lindenwood head coach Patrick Ross considers this game to be one of the more complete contest they have played in recent memory.

“It really took all three phases of the game to be successful,” Ross said. “We spent the whole offseason focusing on our mental toughness and our physical toughness. A year ago, we probably don’t win this game.”

The game began as a struggle for the Lions, as they fell behind 17-6 with just over four minutes left to play before halftime. It appeared as though UCO may continue to pull away.

However, it wasn’t meant to be, as running back Calen Campbell and quarterback Mason Bendigo led the Lindenwood offense on a 10-play, 85-yard drive that pulled the Lions within four points. Following a last-second UCO field goal, Lindenwood entered halftime trailing 20-13.

“At halftime, we were down, but I told my team, ‘we are controlling the trenches, we are playing up front better than they are,’ Ross said. “I knew we were going to win that game.”

The hard work the Lions put in during the first half paid off in the second half, as the defensive line was able to put pressure on the quarterback, forcing him to make mistakes. Defensive back Bakari Triggs made him pay for those mistakes, returning two interceptions for touchdowns. He finished with three total interceptions.

“I can honestly say this was one of the best games of my career, and I’m incredibly proud,” Triggs said.

Triggs’ accomplishment is made even more impressive by the fact that he played the entire second half with a badly injured right hand.

“At halftime, they told me he couldn’t play anymore after jamming up his finger,” Ross said. “And then he proceeded to get two pick-sixes. So thank God he was tough enough to tell the trainers he was ready to get back in there.”

Another key to the Lindenwood victory was the improved rushing attack, which gained 190 yards on 32 attempts in the game, scoring twice on the ground. Calen Campbell led the way with 96 yards on 17 attempts.

“We were getting a real good push from our line,” Campbell said. “Those big guys up front are making it a lot easier for us.”

Following the win, Connor Harris stood by his statement from a season ago.

“It still stands true,” Harris said. “Whether I get one tackle, ten tackles, whatever. As long as our team gets the win, that is the only thing that matters.”