Lindenwood welcomes back “The Sarge” 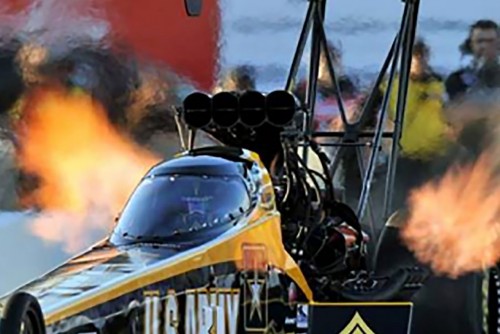 The dragster’s appearance is to promote the start of the NHRA Midwest Nationals taking place in St. Louis starting Sept. 23.

“It’s a great chance to highlight Lindenwood’s campus and our strong relationship with the Army,” said Felix Rodriguez, enrollment officer for Lindenwood’s ROTC program. Rodriguez says that this event is also in place to show appreciation to LU for its military support and to speak to students about ROTC and the Army.

“Along with the display, there will also be a bunch of cadets there to tell their story and inform the students,” said Rodriguez.

The dragster is named after Tony “The Sarge” Schumacher who has been partnered with the U.S. Army for 16 NHRA (National Hot Rod Association) seasons.

Schumacher is one of the winningest NHRA drivers in history with 80 event titles. He has won the NHRA U.S. Nationals nine times. He along with driver Antron Brown will be competing for the U.S. Army Racing Team this year.