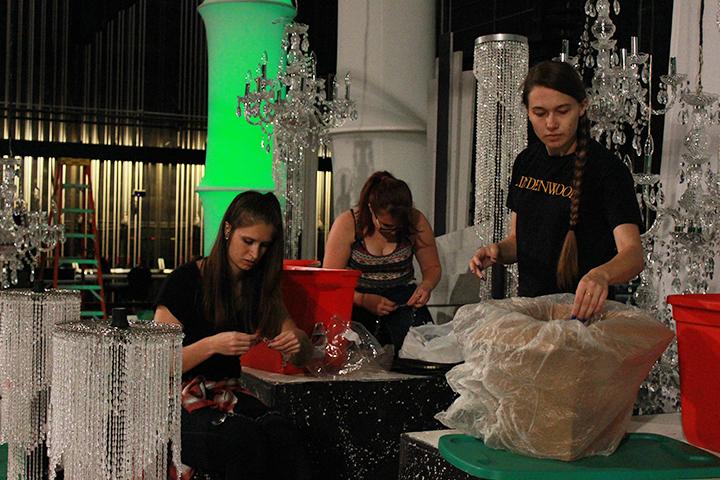 Slashes to the number of student workers this year are requiring numerous campus departments to find new ways to do business.

“The decrease in student workers affects mostly lunch, since this time conflicts with most students’ schedules,” she said.

“The change was so sudden, so quick,” Tinker said. “We did not have enough time to prepare. They just gave us the list saying these are our student workers now. But we are past that point now and able to move on.”

“It has been challenging that many people went away,” said Powell. “We need to rely harder now on everyone else.”

To Powell, it doesn’t seem that the change affected the campus facilities department as much as others. However, he said that dorms used to have positions that cleaned and vacuumed the building, and they don’t exist anymore.

“Now we have to pick up the slack in those departments; that doubles the challenge,” he said.

In the theater department, student workers got cut by approximately 60 percent, said Stacy Blackburn, who is the academic production manager for Lindenwood. Last year, up to 55 students worked in the scenery shop, electrics, sound, props and the costume shop; now there are only 22.

From Blackburn’s perspective, freshmen suffer most from these changes.

The people filling the student worker positions are students who worked there last year, so that left out freshmen. Freshmen have to prove themselves over the course of the year in the rehearsal and production class or through volunteering to be considered for an open spot.

The theater department noticed the cuts in the missing proctors who take care of the building, said Blackburn. She is now short on staff to run events in the J. Scheidegger Center of Arts, such as the Miss Missouri pageant, which took place last weekend.

She used to get help from students who were required to help in their rehearsal and production class, but the requirements for the class changed.

According to Powell, the campus facilities department as well had to streamline the approach of the way they do the jobs. Now defined sheets list the exact things that need to be done, and everything is exactly documented.

“We increased accountability of the individual jobs and need to do the jobs quicker,” said Powell.

Blackburn thinks that overall, the change was not positive.

“It is going to impact how the university is run,” she said. “I don’t think anyone really thought about how much everyone was really relying on those student workers.”

However, Blackburn also understands the university’s reasons for changing the program. She said, “It is just a culture shock and learning shock for everyone.”