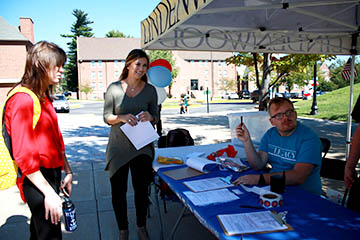 Megan Weigert stops by to register to vote during the Voter Registration event hosted by the Legacy and Lindenlink.com.
Photo by Mili Mena

Nearly 70 people registered to vote at a drive sponsored by the Legacy/Lindenlink Sept. 27.

Those who registered will now be able to vote in the 2016 Presidential Election, which will be held Nov. 8.

The drive was located at two locations; one was outside the dining hall at Spellmann Center, the other outside the upper level entrance of Spellmann.  Staff from the Legacy/Lindenlink provided forms for the registrants and answered questions.

According to the U.S Election Commission, in most states absentee voting requires a voter to make a formal request for an absent ballot.

Student Meagan Rundle said the event was very helpful and made the process convenient.

According to St. Louis NPR,  young voters could be a decisive factor in the presidential election.

Representatives of the groups College Democrats, College Republicans and Young Adults for Liberty helped with the registration.