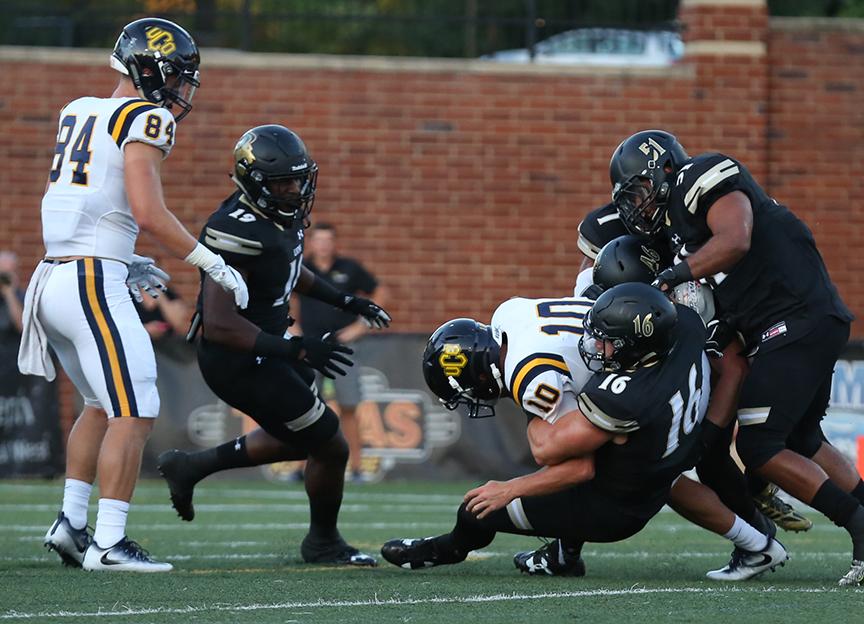 Connor Harris walked on to the Fort Hays State football field with 549 career tackles. None of the previous tackles meant more than tackle No. 2 of that day’s game.

That tackle in the Oct. 1 matchup against the Tigers gave Harris sole ownership of the NCAA all-time tackles record, which previously belonged to Boomer Grigsby of Illinois State.

“This is a remarkable feat,” said head coach Patrick Ross. “Connor has put a lot of time and energy into becoming the best football player he can be. Breaking records like this don’t happen by accident.”

The record-breaking tackle — 551 — took place at the 10-yard line with about one minute left in the first quarter. On the play, Harris stopped Fort Hays’ running back Charles Tigner short of scoring a touchdown for the Tigers.

Connor Harris of @LU_Lions has set the new NCAA record for career tackles at 565, and counting! Check out his record breaking tackle! pic.twitter.com/XYcPQzfegK

“I could hear my family cheering, so I kind of knew,” Harris said. “I don’t think it’s really hit me yet but it will. I’m trying to enjoy the last few weeks of Lindenwood football I’ve got left and do whatever I can to leave it all out there.”

The previous record stood for 12 years, according to the NCAA. With six games remaining in his senior year and an average of 14 tackles per game, Harris is in a position to leave his mark in the record book for years to come, although personal accolades are still far from his mind.

“To me, these stats don’t mean anything,” Harris said. “I’m here to win. I’d throw them all away to win. I don’t care if I get five more tackles or fifty more. I just want to help the team win football games no matter what that means.”

[perfectpullquote align=”left” cite=”Lindenwood head coach Patrick Ross” link=”” color=”” class=”” size=”22″]“He will go down as one of the best defensive players to ever play college football, regardless of level.”[/perfectpullquote]

According to Ross, his accomplishments are viewed by those close to him as more than merely stats on a sheet, but a reflection of the player, worker and person Harris is.

“We as a program and university are extremely proud of Connor’s accomplishments,” Ross said. “He will go down as one of the best defensive players to ever play college football, regardless of level.”

Reflecting on his own legacy, Harris’s on-field greatness isn’t what he wants to be remembered for, but his drive and intangibles.

“I feel like my legacy will be somebody who truly loved the game and cared about his team,” Harris said. ”I want to be remembered for the hard work I’ve put in.

“I’m not the biggest, strongest or fastest guy out there but I’ll do my best to outwork anybody in the weight room. And as a guy who puts the team before himself, loved Lindenwood football and laid it all out on the line all four years.”

Despite Harris capturing the record and finishing the game with 16 tackles, the Lions lost 37-6 to Fort Hays State. They now sit at 1-4 on the season.