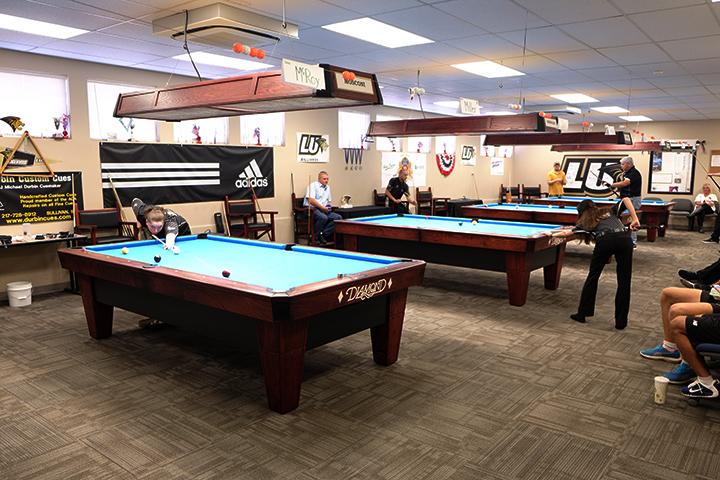 National championships, several first place finishes and an overall record of 11-3 were among the accomplishments the Lindenwood billiards team racked up last season.

While the year ended with the departure of more than 10 players, the team’s new roster is already on pace to surpass its prior success.

Through their first two tournaments, the Lions have posted back-to-back dominating wins, outscoring their opponents 48 to 7.

“In our first tournament we started out winning a few matches,” head coach Mark Wilson said. “Then we won 20 matches in a row. I thought, ‘Maybe I should have backed off the throttle a little.”

Wilson said the strong start to the season can be attributed in part to the addition of five new freshmen.

“This is by far our strongest freshman class ever,” Wilson said. “They’re in here working on their game even when we don’t have practice, and it’s really starting to show.”

Freshman Chris Robinson, nicknamed “The California Kid,” is among the added talent already making strides in his new role. After winning all six of his matches so far this season, he says working with his teammates has played a big role in his performance.

“These are people I can compete with all the time, and they always push me to be better,” Robinson said.

He added that being teammates with some of the top players in the collegiate circuit forces him to improve at a rapid rate.

Setting aside the team’s recent victories, Wilson also is impressed with the team’s desire to showcase how fun and rewarding the sport can be.

“They aren’t just winning; it’s their attitudes, their behavior, the whole thing,” Wilson said. ”It verifies what I’ve always thought: ‘if it’s presented properly, the sport could really take off.’”

To help promote the sport and Lindenwood’s program, the team is planning to host several events over the course of the season. From on-campus clinics to a major event at Ballpark Village in downtown St. Louis, the team is looking to become more involved with the community.

“For me, winning is not just defined on the matches,” Wilson said. “It’s the changing of the perception of the sport.

“We are part of a grassroots movement, and we are doing our part to help grow interest.”

The team will continue its season with a matchup against Rudy’s Rackrunners on Oct. 5. The contest is scheduled to begin at 6 p.m. in the Lindenwood Billiards Arena, situated next to the university’s field house.