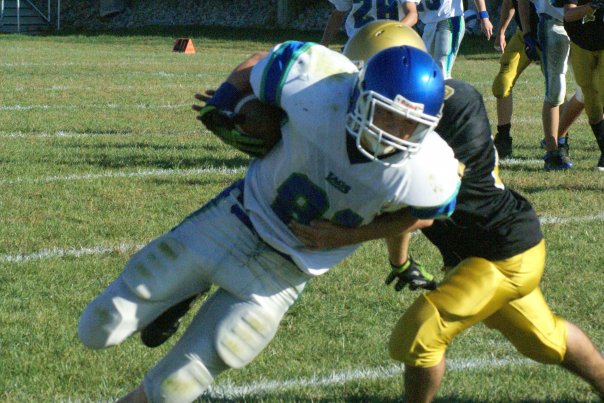 Connor Harris has etched his name in collegiate greatness by breaking the NCAA all-time tackles record, but to his high school football team, he’s still the same guy they shined with under the Friday night lights.

Anybody who played Blue Springs South knew they were going to get a piece of Harris at some point in their high school football careers. He had numbers in almost every statistical category due to his success rate at nearly every position. From quarterback to punter, the All-American had a dominating presence on the field.

Harris was trusted by his team for the work ethic and all-around skill that could will a team to greatness. According to his former coach, no matter what situation he faced, skill, poise and confidence overshadowed doubt.

“In our semifinal game, we’re down 21-20 late and Connor went into the huddle and basically told everybody, ‘We are scoring on this drive.’” former Coach Greg Oder said. “I wish I could have filmed it, because you could see everybody changed right then.”

Whether it was celebrating the comeback win in that semifinal game or the state championship later that year, Harris and his friends from the team would always make a point to wind down over a postgame meal.

“After games we used to always meet up at this Mexican restaurant called Poncho’s and talk football.” said former teammate Steve Sullivan.

Another high school  teammate, Trevor Wescott, remembers pregame meals being a ritual as well. Each week a new teammate’s family would host. These days, it doesn’t appear much has changed.

“We’d still probably just get together and watch football and tell stories from college,” Wescott said. “Anytime we got together we just hang out and reminisce over that kind of stuff.”

Other aspects of these relationships, such as merciless mocking, have also remained intact. On-field pictures of Harris today that may intimidate the competition around the MIAA, but some bring about a much different reaction from his high school friends.

“Is the dude going bald now?” Wescott asked. “He used to always kind of buzz it but yeah, it’s completely gone now.”

Conversations like these were everyday occurrences in the group. Harris could dish out insults necessary to combat the same treatment from his friends.

“He’s definitely a guy who would give you some crap,” Wescott said. “We all gave each other crap. Like his goatee thing. He used to braid it and put the hair through the chin strap. We used to give it to him for that.”

Though most of the old group is now focused on football at different schools, they’re all aware of Harris’ success. They believe that success will find him no matter what he chooses to do beyond Lindenwood.

“He deserves everything he gets,” Sullivan said. “Because I know he’s worked so hard for all of it.”

Harris’s future is still up in the air at this point. It could be in the NFL, it could be on the police force, or it could be himself sitting across from Sullivan and Wescott discussing football back at Poncho’s.

Just the way they’d want it to be.