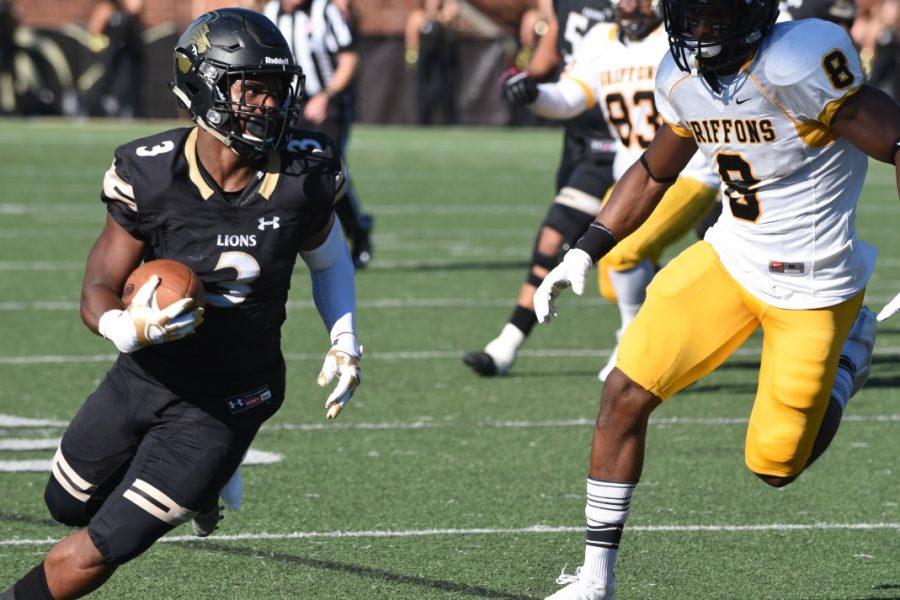 Running back Aaron Daniels shown in one of his 18 carries that totaled 129 yards in the game. Photo by Nao Enomoto

The Lindenwood football team fell to 1-5 on the season after a 37-29 loss at home to Missouri Western.

Once again, the Lions’ passing game struggled as quarterback Allen Thigpen went 11-22 for a total of 121 yards and 0 touchdowns. Assisting Thigpen’s modest passing game was the offensive line, which gave up 4 sacks.

The running game kept the Lions in the contest, accounting for all four of the team’s’ touchdowns. Thigpen and running back Aaron Daniels both rushed for more than 100 yards, scoring two touchdowns each. The team ended the day with 225 yards on the ground.

Despite their combined efforts, the Lions were outgained in nearly every column of the offensive stat sheet.

Missouri Western gave Lindenwood numerous opportunities to take control of the game after they turned the ball over twice. While both the turnovers turned into points for the Lindenwood, the Lions gave away 74 yards on 9 penalties, haulting their chances to take the lead.

After Lindenwood’s big season opener, the team has lost 5 straight games. The Lions hope to right the ship on Oct. 15 at Emporia State.