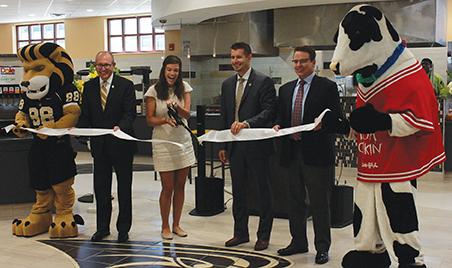 The president of Lindenwood’s Student Government Association said her main goal this year is to partner with student athletes and create a better campus culture.

Regan Cole said she wants to accomplish this by working with the Academic Success Center and the Student Athlete Advisory Committee.

“They do a great job at supporting each other,” she said. “I hope to spend more time with them and work on getting them involved with LSGA as well.”

This is St. Louis native Cole’s third year in the organization; her freshman year she was a senator, and as a sophomore she was the events coordinator.

Last spring, Cole and former president Sam Rudloff hosted the Black and Gold Reception at the Lindenwood House to thank organizations for their hard work throughout the year.

Rudloff said that Cole took on at least 90 percent of the work and was “very driven” and that she is going to “add a lot more color” to LSGA’s leadership.

“She has been running the meetings very proficiently, but at the same time with a nice energy,” he said.

Cole said applying for a student government position was a spur-of-the-moment decision.

“They opened the floor to anyone who wanted to be a senator,” Cole said. “I gave a speech and became known as the ‘awkward girl.’ But, luckily, students also thought I was very relatable.”

Cole said she decided to apply for president her junior year because she plans to graduate a semester early. She will graduate with a degree in psychology and wants a career in healthcare administration.

Cole is also a member of Delta Zeta. She said her sorority sisters “make me want to be a better version of myself.”

Lily Butterbrodt, another Delta Zeta, said Cole was a valuable member of the chapter.

[perfectpullquote align=”right” cite=”Regan Cole” link=”” color=”#D3DF36″ class=”” size=”26″]“I’ve been able to truly know what it’s like to become so passionate about making Lindenwood the best university it can be.”[/perfectpullquote]

“She is always encouraging her sisters to do better from our chapter, the community and themselves,” Butterbrodt said. “We were so proud of her when she decided to run as the LSGA president and act as liaison for the Greek Life community and the rest of the student body.”

“I try to go to a lot of sporting events to meet students in different sports and organizations,” she said.

Cole said she has enjoyed her leadership journey with LSGA thus far.

“I’ve been able to truly know what it’s like to become so passionate about making Lindenwood the best university it can be,” she said.