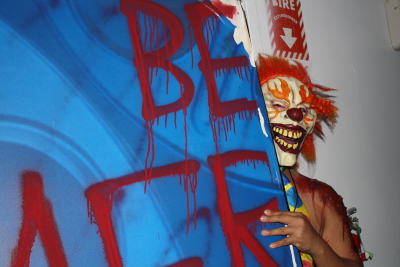 Visitors to Lindenwood’s Dark Carnival will see a step up in security this year, due in part to creepy clown reports both locally and nationwide.

John Bowman, director of the university’s Public Safety and Security, said that in previous years, two security officers worked the event, but that number would be “significantly” higher this year. He declined to give an exact number of officers who would be present.

Bryan Stone, organizer of the sixth annual Dark Carnival event, said an expected surge in attendees this year also is increasing the need for more security.

Attendance for the event has jumped about a 50 percent increase every year, and he said he expects that trend to continue this year. The event will feature 71 booths, about twice as many as last year, and the university has been running ads on seven local radio stations and has sent out more than 6,000 emails to students and alumni promoting it.

Booths will be featured from campus organizations as well as groups from the community. A variety of free food will be available, and visitors will be able to play various carnival games throughout the evening. Live music will be performed by the group, Members Only, and radio personalities from 105.7 The Point and KSHE 95 will act as the masters of ceremonies throughout the event.

Stone also said that several changes would be made to the haunted house attraction, which will again feature a scary clown floor. Before visitors enter, they will get an overview of what’s inside and go over the rules and regulations of the haunted house. Organizers will let visitors know that none of the actors, including the clowns, will touch them, he said.

Although security will be bumped up, Bowman said creepy clown sightings at Lindenwood have been minimal, with only one report being made to the campus security office.

Bowman said the call turned out to be “several students trying to scare their friend.”

Only one clown report has been made in St. Charles city, according to Lt. Todd Wilson, public information officer with the St. Charles Police Department.

He said earlier this month, a local high school student was reported walking home wearing a clown mask, but nothing indicated it was related to anything sinister.

Clowns have been a larger issue recently at several local area high schools. In early October, emails were sent to parents in several school districts, including Hazelwood, Parkway and Ferguson-Florissant, saying that clown threats had been made against the schools. However, no incidents actually occurred.

Nationally, Target announced last week that its stores will no longer be carrying clown masks amid the nationwide scares surrounding creepy clown sightings.

As for the Dark Carnival, Stone said that things featuring clowns, like the haunted house, are optional attractions, and that people who may have an issue with anything inside should enjoy the other activities instead.